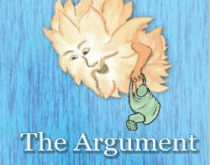 The Argument – Max relays to Sarah a story, he claims to have overheard the Sun, Wind and Rain arguing one day, and that argument involved not only who was most important in the process of growing plants, but also in growing his little sister who happened to get in their way. As the elements argue over who is the most powerful, they become confused in their roles and each thinks they are the one who made the little sister sprout. Sarah laughs at his story as she picks up her umbrella to leave, but as the wind howls and the rain taunts, she begins to wonder if he might be telling the truth after all.

See more of these books below