The End of Longtails 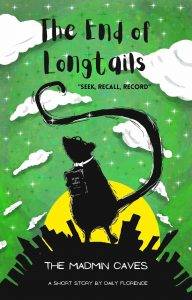 This is the FIRST story in a set of space stories from Orb Central Library. In the far reaches of the Canis Major Dwarf, on planet Orb, a young longtail named Denver works at Orb Central Library as a librarian, where he fights fake news alongside his fellow longtail species and collects moments (otherwise known as stories) to submit to the Orb Central Library for all of eternity. With dreams of rising up the ranks and becoming a space collector — just like his grandfather — so that he can one day travel the universe to collect moments from outer space, Denver decides to break longtail tradition and form a crack-fake-news team made up of the other animals of planet Orb to help him in his mission — a decision that is to set off a cataclysmic chain of events. In this short space story, Denver meets his new recruits and starts his first day as team leader of the newly formed story division when he goes and makes one huge mistake on his walk to work — a mistake that could cost him his job. With Orb hitting a panic scale seven, a team of dysfunctional new recruits, a bunch of spiritual moggy burners out to sacrifice him, and Vince, a fellow team leader who has it in for him, hot on his tail, Denver has his work cut out to submit his team’s first-ever moment to the Orb Central Library before sunset.

Sample Text from The End of Longtails

“Far above the rooftops lies the path to my planet — a path you have no doubt walked past on many occasion. But the next time you do, I must insist that you stop and take note because this is no ordinary path, it is “The Path of Moments”, a path so formidable that it leads to every moment to have ever taken place in the universe. It’s an endless glittering haze of stars that lead to every adventure to ever exist, every memory that has ever been created, and to every life that has ever been lived.

When the clouds on Earth allow, look to the dark skies and you will see the Milky Way Galaxy above. The Path of Moments is a cloudy, hazy tube shape, made up from a hundred billion stars that stretch across the sky and lead to every corner of the universe.

I live in the next galaxy over on planet Orb, amid the far reaches of the Canis Major Dwarf Galaxy. Travel The Path of Moments and you will eventually come upon my planet, sitting quietly in space, spinning in its beautiful creamy green light. Nobody has ever bothered us there mind, we are so far out of the way, although we do venture out. Space Collectors are our inter-galactic explorers on planet Orb and I couldn’t wait to be one.

At the Orb Central Library, where I worked as a librarian, those who rose up through the ranks could achieve Space Collector status, which meant that they could travel the path and collect moments (or what you earthlings would call stories) from other planets which they would take back to record in Orb Central Library for all of eternity. That was my path in life, my reason for being… until the unbelievable happened.

The truth is, the moments in my story began at the beginning of time, but I will start this story on the frst day of my diversity program at Orb Central Library. Up until that point in time, us Longtails had been the only breed of animal of Planet Orb to so much as set foot in the Orb Central Library, and for good reason too — not that I had listened.

If you are reading this then it means that somebody on Earth has found my moments that I saved from Orb Central Library and sent down the path. Please send help. My name is Denver Longtail and I was a communicator who lived at 4A Whispering Lane, Orb Central City, Planet Orb, in the far reaches of the Canis Major Dwarf Galaxy. I was a librarian at the Orb Central Library who lived to seek, recall and record and these are my moments, in fact, they are the only moments to now exist, there is nothing left, the Universe is gone.”

Read the full book by selecting one of the buttons below the post.