Moonhag and the Monster Monkey 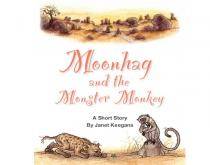 Moonhag and the Monster Monkey – A short and funny story of how a young vervet monkey, Kubuka, met and became friends with a young spotted hyena, Bazi. Children of about 5 and up will enjoy this simple tale, and might even learn a few facts about African wildlife – such as how many different creatures make their homes in ant hills, and who is Moonhag? Read on and find out!

Text from Moonhag and the Monster Monkey

Once upon a time in the bush, there lived a beautiful hyena female called Mpisa, who had just given birth to her first litter of cubs. Her clan had carefully chosen a good den. It was a large burrow underneath a tall ant hill. Every day the clan would bring food for the new mother, so that she could look after her little ones while they were very small.

After a few months, the clan leader, whose name was Lady Crocuta, wanted Mpisa to come out on the daily hunt again. The cubs were toddling about now, and could safely be left with auntie Moonhag. Moonhag was getting old; her night-sight was not as good as it once was, and she could no longer keep up with the rest of the clan when they were hunting or foraging. Often they would stay out all night, only coming back the next day. So Lady Crocuta decided that old Moonhag should stay at home in the den and look after the young ones.

There were three cubs in the litter, and their names were Balani, Bamani and Bazi. Balani and Bamani were girl cubs, and Bazi was the only boy. Auntie Moonhag soon found out that Bazi was a bit of a pawful. He was large for his age, strong and quite adventurous. Every day, auntie Moonhag would wait for mid-morning time, which is when things start to quieten down in the bush. Then she would lead the three cubs out of the den. She let them romp around in the sunshine and explore the area all around the ant hill, but they were never allowed to wander off, out of sight.

“The lions will get you,” she would say. The cubs would play with old bones, pretending to hunt and pounce on them. But a hyena’s favourite game, of course, is Tug o’ War. Balani and Bamani would each grip one end of a bone and pull and pull, giggling in their little high-pitched voices. They didn’t like to play Tug with Bazi, because he was stronger than they were and he always won. So Bazi often had no-one to play with and he had to amuse himself. He could try to catch grasshoppers, or see if he could sneak up on auntie Moonhag without her hearing him. She was a bit deaf, so this was almost too easy.

Bazi had great eyesight and hearing but best of all was his nose, which he used to discover things. The cemented earth walls of the ant hill, the grass, the heaps of dry leaves, and the bark of nearby trees all had a different smell. After a while he could close his eyes, pretend it was night-time, and find his way around using only his nose.

See more of these books below