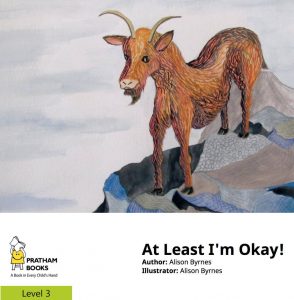 At Least I’m Okay tells a poignant story about an attitude that is too frequent among us related to climate change. In this important picture book about climate change, the main character, Una the mountain goat, ignores all the changes around her as her friends leave one by one, thinking, “At least I’m Okay”. The book ends with an important message and explanation of climate change perfect for elementary children to begin learning about the important concept.

This book is a creative commons picture book about climate change brought to us by Pratham Books, and their Storyweaver platform.

Una, the mountain goat, lived in Sakuland.
Sakuland was a wonderful country. It stretched from the shores of the sea to the forests, from the valleys to the mountain.

The animals loved Sakuland.
There was grass for the rabbits and the deer, insects for the birds and the bears to snack on, and fish for the crocodiles and wild cats. There was clear, cool water for everyone.

Una lived high above the others, on top of a mountain.
The climb up and down the rocky mountain trails was long and difficult. She didn’t spend too much time with the other animals, and got used to being alone. She rather liked it – she could do whatever she wanted, whenever she wanted.
Sometimes Una thought that the others were a bit silly. Why do they always have to do everything together? Can’t they go to the stream by themselves? I do, thought Una.
All the animals had ways they liked to do things. But Una thought her ways were the best.

Slowly, Sakuland’s climate began to change, but the animals weren’t really paying attention.
One day, the whales who spent most of the year in Sakuland’s waters announced that they were going to live someplace else.

“Why?” asked the turtles. “It’s quite nice here.”
“The water has become a bit too warm for us,” said the whales. “We will have to go further north where it’s cooler.”
The whales liked to live in cool waters and Sakuland’s water was now too warm.

The turtles would miss the beautiful songs sung by the whales. But they didn’t think too much about it. At least I’m okay, the turtles thought.
“Picky, picky,” muttered Una to herself. “I don’t mind if it’s too hot or cold! They should be more like me.”
Everyone soon forgot about the whales. But one day, the turtles started to pack up and leave.
“Why?” asked the wild cats. “You always seemed happy here.” “There’s hardly enough sand left for us,” said the turtles, who laid their eggs on the sandy beach.
“Where did it go?” asked the wild cats.
“All we know is that the sand used to reach to the big rock,” said the big, old turtle. “But the big rock doesn’t look so big now – the water has almost covered it.”
Too bad for the turtles. But at least I’m okay, thought the wild cats.

Una saw the turtles leave and thought, What difference does it make to me if the sand disappears under water? The turtles should have been smart like me when deciding where to live.

Una went looking for some grass to snack on and forgot about the whole matter.
Then the wild cats left. They couldn’t catch nice fish anymore in the stream. It had become just a trickle.
The deer thought, Oh, how terrible for the wild cats. But at least I’m okay.
Una looked over at the stream where she drank. “The wild cats are pretty tough, but they must not be as tough as me.”

One day, Una noticed something strange.

Every year, the snow on her mountain would melt, just like an ice cube, and fill up her stream. But now there was less snow.
Una wasn’t quite certain and thought, Maybe it just looks that way today.

But then strange animals began to come to Sakuland.
Everyone tried to be friendly to the cows. But the newcomers didn’t take much notice – they kept munching the grass and chewing it and chewing it some more. And there were so many of them!

The deer were not too happy when the grass began to disappear. Slowly, the deer had to go outside Sakuland to find enough of the grass they liked.
Hmmm… they should see what I have to eat at times, thought Una. Sometimes I have to lick the lichens on rocks. Not pleasant at all.
Una stayed on her mountain as long as she could, but she often found herself, without enough to eat or drink.

Finally, hungry and thirsty, Una climbed down the difficult mountain path. She tasted some of the grass from the hills, but it wasn’t the kind she liked.
She found a stream in a valley, but the water’s taste was not as crisp as she was used to.
Now Una realised why the other animals had left – it’s very important to eat the food that suits you best and have water nearby.

The animals she knew had left Sakuland when they couldn’t find their favourite food easily, or when they were too thirsty because the stream had slowed down to a muddy trickle, or when their home trees were cut down to build homes for others.
Una and her friends thought at least it’s not me when changes affected someone else. As the oceans became warmer, the whales left in search for a more suitable home. The turtles, the deer, and Una couldn’t care less.
But later, they had to admit now it IS me.
Una had to admit that having friends nearby is a necessity. She was determined to go find the others. 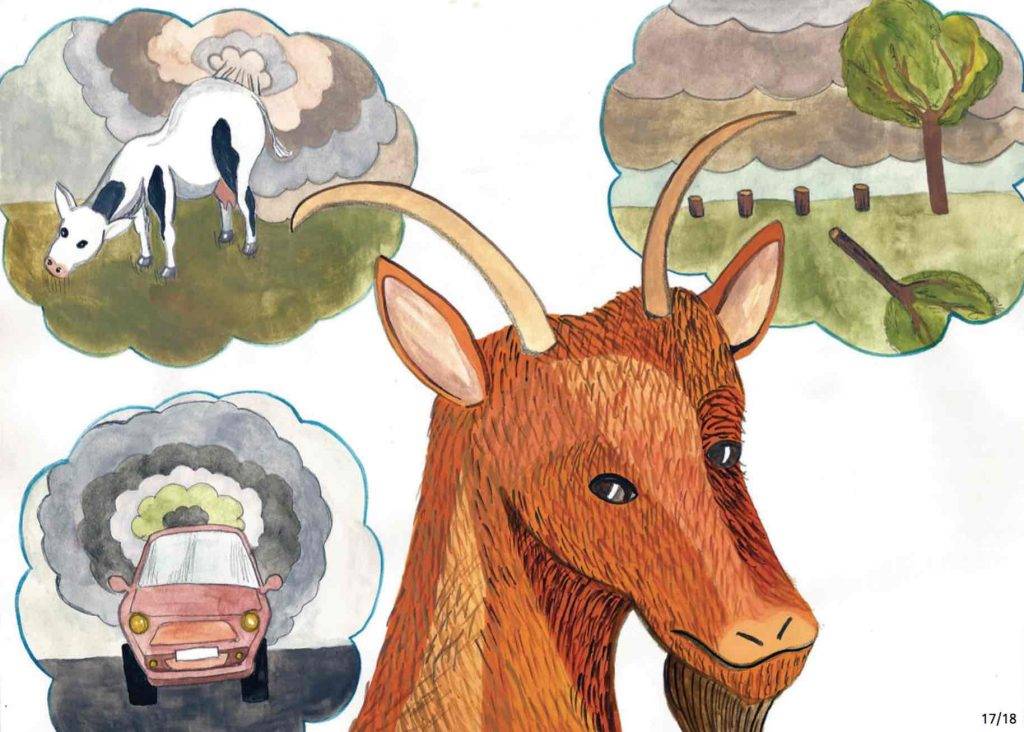 At least it’s not me – Message about Climate Change
Una and her friends who live in Sakuland are facing climate change, just like we are. Human beings are burning more and more Green Houses Gases (GHG) – there’s carbon dioxide from coal and oil. Carbon dioxide is also released when we cut trees, then methane which cows that live in farms burp out, and nitrous oxides from cars and other vehicles.
These Green House Gases are added to the atmosphere and that is causing global warming and changing the climate. As more heat is trapped in the atmosphere by the GHGs, the ice in the poles is melting and sea levels are rising.
All of that means that the weather is becoming more unpredictable – it’s cold in the summer and warm in the winter, and the rains don’t come on time, like they used to. And that is climate change.

Because of Climate Change…
When forests are cut down, they add to the carbon dioxide level in the atmosphere. Animals also lose their homes, the forest, and they have to go to far-off places in search of food.
Farmers are not able to grow their crops properly because of erratic rainfall. Often, they sow the seeds but there’s no rain, and their crops fail. Imagine a world without mango or chocolate because there was no rain or too much rain and the crop failed!
Unpredictable weather also affects human beings. For example, during storms, floods, or droughts, people lose their homes.
The pollution in the atmosphere affects our health and we fall ill more often.

See more books like this that help teach children about our environment in our Conservation category.

See more books that make a difference in our Books For A Cause category.