Cracking the Code: Women Who Have Changed the Way We Look at Computers 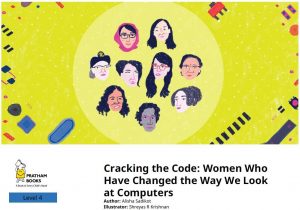 Cracking the Code: Women Who Have Changed the Way We Look at Computers tells the true story of the many women who have made significant contributions to the world of code and technology.

We hear about the women who are behind the development or use of the sophisticated technology we have today, including Vandana ‘Vandi’ Verma, Anouk Wipprecht, Sanghamitra Bandyopadhyay, Fereshteh Forough, Ada Lovelace and many more.

Cracking the Code: Women Who Have Changed the Way We Look at Computers (English), is written by Alisha Sadikot, illustrated by Shreyas R Krishnan, supported by CISCO, and published by Pratham Books (© Pratham Books,2019) under a CC-BY 4.0 license, first released on StoryWeaver. Read, create and translate stories for free on https://www.storyweaver.org.in.

Sample Page from Cracking the Code

THE FIRST ‘COMPUTERS’ WERE HUMAN, NOT MACHINES.
MANY OF THEM WERE WOMEN.

Women have kick-started countless initiatives and organisations across the world that nurture female coders, like Girls Who Code, Black Girls Code and Indian Girls Code.

The 2015 world record for a women’s hackathon saw 7,314 female participants across 34 countries, with an 80% participation from India.

Padmasree Warrior, an Indian woman, was the CEO of a company pioneering work in self-driving cars.

BEHIND THE WHEEL Vandana ‘Vandi’ Verma was 11 years old when she got behind the wheel of her grandfather’s tractor. She never imagined that someday she would navigate a rover on Mars. 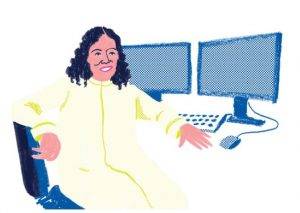 Today, sitting at her desk at NASA, Verma drives, programs and navigates the Curiosity rover on Mars. Using Artificial Intelligence, the rover takes images, analyses soil and rocks, and helps NASA understand the planet’s past. Though Verma helps it do its job, the rover makes its own decisions.

<end of sample – Cracking the Code>