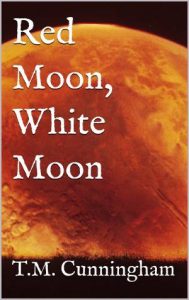 In Red Moon, White Moon, Connell Maxwell realized early on in life that school had a strict hierarchy: the bullies and the bullied. Unfortunately, he was doomed to be a member of the latter group. He always wondered if it was his friends who put him there, but, deep down he had another suspicion, his odd birthmark. It was the one thing he felt caused him the most embarrassment and rejection in the world. He went through great lengths to hide it from others not realizing it was the key to his destiny.

Connell was a fifteen-year-old sophomore at Chamberlain High School. For him and his fellow outcasts of the school’s student population, the mighty Chief’s Head was their safe haven. It was the only place in school where the popular kids would not terrorize their prey because of the fear of being seen there. Little did he know this would also be the place where he would be introduced to another group of exiles: the ones from Horror and Things. Ever vigilant, Connell resisted their theories of his birthmark and his purpose in life. His strenuous code of cynicism left no room for trust, friendships, or patience. However, this new group of misfits, who were shrouded in secrecy, had a plan to convince him to accept his fate.

Filled with everyday struggles a young adult faces such as intimidation, acceptance, fear, and love. Red Moon, White Moon follows Connell through a plethora of distress and chaos, leading up to the final climactic realization that may lead him to his own demise.

Chapter One A Mundane Life

High School—ugh. It seemed as though the popular crowd enjoyed it, probably because of the unlimited social interactions it provided them. But for me it was nothing more than a giant cesspool of snobby, self-centered, browbeating parasites. The social divisions never changed. It always puzzled me how the most popular, privileged brats got to decide how everyone else was to be treated. What joy it would bring to my soul to see the socialites squirm on the bus ride to school, not knowing what torment awaited them. Instead, I was the one encased in that yellow casket, being delivered by its balding, overweight driver, to the vultures in the schoolyard.

While the bus made its rounds, picking up the school’s victims, I couldn’t help but notice the look of despair we all shared. Every face wore the same anxious look, up to the final stop. The last one to climb aboard the chariot of torture was Kevin, who had been my best friend since kindergarten. In fact, as I thought about it, he had been my only friend since kindergarten. He was a tall kid with pale skin, shaggy hair, and a love for black clothing. Besides the obvious reasons that made him a target, he had the ultimate curse: his last name was McCool. The countless hours of torture he endured by the browbeaters for his last name alone would rival those of the rest of the passengers combined. Still, he never allowed the bullying to bother him. He always wore a bright smile on his face and was constantly preoccupied by his obsession with horror folklore, role-playing games, and the string of killings by wild beasts making news in the state. I found his logic behind it unhinged, and I hoped he didn’t bring it up this morning.

As Kevin made his way to the rear of the bus, I couldn’t help but feel sorry for myself. I was fifteen and handsome enough. My sandy-blond hair, blue eyes, big smile, and trendy clothes should have scored me a place with the more popular crowd. Yet I was still exiled to dwell amongst the castaways. I often wondered if it was my association with Kevin that kept me out of the in-crowd; however, betrayal of our friendship was never an option. He had always been there for me, and, even then, I knew a friend of that magnitude came around once in a lifetime. All the superficial acquaintances in the world wouldn’t justify throwing that out the window, even if it meant I would no longer be on the receiving end of the browbeaters’ hostility.

“Chamberlain High School, here we come.” Kevin plunked down into the seat next to me and dropped his backpack on the floor.

“Oh boy,” I said, “a new school year, same old agony.”
“Come on, Connell. It’s going to be different this year. We’re not the freshmen.” Kevin sounded so confident I almost wanted to believe him, but I knew better.

The last time I bought into that crap was our final year of middle school. Eighth grade was supposed to be our break-out year, the year where it was our turn to rule. Instead, we found ourselves at the beck and call of sixth and seventh graders who were considered cool enough to hang out with the popular eighth graders. In fact, it got so bad that year that Kevin once had his head dunked into a toilet for their amusement.

“You’ve said that every first day of school since the fourth grade, but nothing changes. The popular kids rule the school, and we’re the doormats. When are you going to wake up and face reality? I know I don’t have to remind you about eighth grade, do I?”

“It’s just a gut feeling.” He leaned back and put his knees up on the back of the seat in front of him. “This year is going to be different. I can’t put my finger on it, but something enormous is going to occur for the both of us.”

“Hey, that reminds me, can you believe there was another attack last night,” he said, pulling out his journal of newspaper clippings.

“Kevin, how many times do we have to go over this? They’re either wild dogs or some crazy cult of sick individuals,” I reminded him, pushing the clippings away from my face.

Slamming the journal on his lap he sighed and said, “Why are you so closed- minded? Can’t you see the pattern? They only attack during full moons.”

“So what? My dad used to tell me that Mom acted crazy every full moon—does that mean she went around murdering people?”

Rolling his eyes and turning the page, Kevin responded, “Why do you always go there? I think you joke about it to cover up how much that situation still haunts you.”

Want to find more books like this one? Check out our Older Children category.