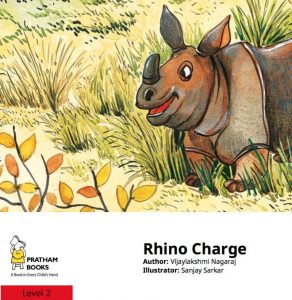 Ringo the Rhinocerous is shy, Rhino Charge is a story about overcoming shyness.

In Rhino Charge, Ringo learns to overcome his shyness by practicing to gain confidence. An endearing story for young children in kindergarten or early grades, and an important lesson, that more practice helps build confidence, and gaining confidence helps overcome shyness.

This story is a level two story from Pratham Books, you can see many more stories from Pratham books in our Pratham-Storyweaver category.

If you’re looking for stories about animals, see our Animals Category.

Rhino Charge has an important message about overcoming shyness, see more books that help with behaviour in our Behaviour category.

Text from Rhino Charge – A story about overcoming shyness

In the grasslands of a National Park called Kaziranga, there lived a baby rhinoceros called Ringo. He was as strong as a baby rhino could be and lived with his mother and father.

His brownish-grey hairless skin was knobby. He was very proud of his single horn made up of matted hair. Ringo was very shy and loved to wallow in the wet mud on the banks of the Brahmaputra which flows through the sanctuary.

One hot afternoon, Ringo came to the river to drink water. This was the place where most animals came to drink water. There he saw gathered on the banks, a group of animals. There was Gajaraj, the elephant, Natkhat, the langur, Hemu, the swamp deer, Kalia, the crow, Nelu, the Indian Bison, Harini, the black necked stork along with Bhanu and Hari, the two frogs.

Gajaraj, the elephant was the first to spot Ringo. “HELLO!” He trumpeted. “I am Gajaraj the elephant and these are my friends.” Ringo very shyly looked at them all. “What is your name?” Natkhat, the langur asked.
Ringo looked around and took a step back. “I am R-H-I-N…Rhin…” Just then a fly sat on his nose and Ringo sneezed.

Natkhat giggled and jumped on to the branch of the tree which had spread itself above the water. “He, he, he…Rhin…Rhin.” They all thought that he was just “Rhin.” Hemu, the deer looked at Ringo, turned up her nose and bent down to drink water.

Bhanu and Hari swam deep down into the water and bobbed up and down every few minutes. And Harini did not look at Ringo.
Kalia cawed loudly. “So, you are Rhin. What a strange name.”
Ringo looked at them. He snorted.
“Rhin, Rhin…Hehehe…” Natkhat chattered.

Ringo, the rhino stepped back and charged. His head bent, he snorted and charged. His short, strong legs ran so fast that he did not stop. He was very angry. How could he be so silly and shy that he could not tell them his name? He ran and ran through the tall grass along the bank.

He passed herds of deer grazing on tender grass. The field mice, the wild rabbit, and the eagle… he ran past all of them. Suddenly he found himself on the main highway which ran close to the National Park.

He stood in the middle of the highway. “How could I be so shy and not be able to say my name? I must practice hard.” He snorted and grunted and started… “RHIN, RHIN, RHIN…” He got stuck again. “This will not do…,” he said to himself. Suddenly, there was honking. The buses, cars and trucks stopped.

What was this rhino doing in the middle of the highway?
“Honk… honk…” Ringo felt scared. He turned and charged back again down the slope, across the open land. He charged… as fast as his legs took him.

He ran and ran till he reached the tall grass and he said to himself,
“Rhino… Rhino… Rhino…Rhino…”
The eagle had flown high up in the sky and with his sharp, beady eyes, he spotted Ringo practicing very hard to say his name, loud and clear. The field mice also watched and so did the rabbit.

He went back to the same place where all the animals came to drink the cool water from the Brahmaputra. Soon, Gajaraj came followed by Neelu, Hemu, Natkhat, Kalia, and Harini. Bhanu and Hari were already there. The field mice, wild rabbit and the eagle joined them. Ringo looked at them.

Slowly and surely he said loud and clear, “I am RINGO, the RHINOCEROS.” He could not imagine that he could say his name so clearly. Gajaraj said, “Hello RINGO… Rhinoceros.” The eagle said, “He has worked hard to say his name. We must not make fun of others.” Gajaraj looked at Natkhat. “No making fun.” Natkhat said, “Let’s be friends, Ringo Rhinoceros.”

“This National Park is for all animals.” Gajaraj trumpeted loudly. “We must live in harmony and not make fun of others.” All the other animals said “Hello, Ringo… Rhinoceros.”
Ringo was very happy. He had learnt to say his name and was no longer shy and had made so many new friends.

<The end of text from rhino charge, a story about overcoming shyness>