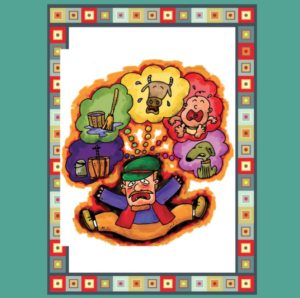 The Man that Thought He Was Smarter Than His Wife – A Folktale from Norway – A hilarious adventure of what a man does when he takes over his wife’s chores for the day, combined with a Viking ship activity at the end, this book makes for a great story and activity time. A beautiful folktale from Norway.

Brought to us by Pratham’s Storyweaver platform, reaching more children with reading.

A Folktale from Norway

There was once a farmer who was always glum and grumpy. But his wife was not like him at all – she worked hard and was a cheerful soul. But Gloomy Gus was forever finding fault with her. He thought she was stupid, and couldn’t do the smallest thing right.
One evening, Gloomy Gus came home from the fields in a very bad mood. He knocked at the door, but his wife was busy, so she took an extra minute or two to open it.
This made Gus as grouchy as a cross-eyed alligator with a toothache. He yelled at his wife, scolded the baby, and stepped on the poor dog’s tail. And his crooked teeth went snap-snap, flash-flash, as he kept shouting louder and louder.
When he ran out of breath, his wife said, “Tch! Tch! Why are you making such a fuss? Tomorrow, I’ll go out and work in the fields, and you stay here and take care of my jobs. And let’s see how you like it.”
“That’s a GOOD IDEA!” said Gus. He thought he was very smart indeed, and wanted to teach his wife a mighty big lesson. “I’ll show you HOW THINGS MUST BE DONE!”

Read the full book by selecting the buttons below the post

See more books like this in our Pratham-Storyweaver category