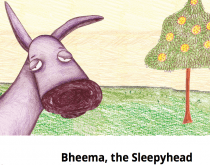 Bheema The Sleepy Head – Bheema just can’t seem to wake up in the mornings, how will she solve this problem? Another great free kids book in Creative Commons from StoryWeaver and Pratham.

By: Kiran Kasturia and Shweta Mohapatra

Text and Images from Bheema The Sleepy Head

Bheema loves to sleep and just cannot get up early.
Ramu, the washerman, scolds Bheema often.

One day, Gauri, the cow, asked him, “Bheema, why are you so sad?”
Bheema said, “I cannot get up early and Ramu shouts at me every day. Will you wake me up every morning, please?” “Yes, I will, ” said Gauri. Early next morning, Gauri mooed loudly, but Bheema did not wake up.

Coming back from the river in the evening, Bheema met Moti, the dog.
“I can never get up in the morning on time. Will you wake me up?” Bheema asked Moti.
“Yes, I will, ” said Moti and the next morning he barked and barked but did Bheema wake up? No Sir!

That evening Bheema met Cheenu, the rooster.
He said to Cheenu, “You crow in the morning and everybody wakes up. Will you wake me up too?”
Cheenu agreed. The next morning, Cheenu crowed long and loud, but Bheema did not wake up.

See more books about animals below

The Smile – Inuit Fable - In the harsh Arctic winter a girl, her family, and her dog struggle to survive. When her parents go in search of food the girl has a dream and resurrects the village landmark which in turn brings them good fortune. The book is adorned with gorgeous Inuit inspired art. Terms in the book: inunnguaq – ...
Spread the love
Tags: Bheema the Sleepy Head, Children's Book, free childrens book, Free Kids Books, free kids stories, Kiran Kasturia and Shweta Mohapatra
Hard copy -
Views:10364
Download Free PDF -
Downloads : 29950