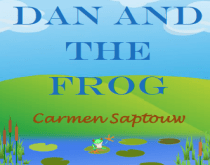 Carmen Saptouw has several books for young and up to middle grade children on the FKB website, you can see her books here:

Carmen tells us a little about why she writes:

As a young child of only 8 years old, I was inspired to write  children’s stories. Following my childhood years, I got so involved with being a teenager that I  completely forgot about my passion for writing.

Only in 2011, the year I turned 29, was my  passion reawakened from its deep slumber when my dad found the stories I had written as a  child. So more than 20 year later I rewrote the stories with the aim to preserve it, but as I  typed, the stories evolved and new ideas were sparked.

I am married and a mother of a beautiful baby girl. I completed my tertiary education in Human Resources Management and worked in the industry for 9 years. After the birth of my baby in 2014, I decided to stay at home with her because this not only allowed me to share precious moments with her, but also gave me the opportunity to focus on my writing.

I aspire to share my stories with children around the world, and for each story to have a sound moral lesson.

The first story I rewrote was The Forest Fairy. Originally it was in Afrikaans, my mother tongue, but I found that I wrote better in English now, so Sannie became Lilly and a story of hope was born.

After I read another of my childhood creations, about a  talking frog, the story changed into a better tale and Dan  and the Frog was created, a story of a boy and a frog that  take a journey to save a kingdom of frogs.

Then ideas for new stories started. I saw a grasshopper on a leaf with a stick as an oar, which led to The Rescue my third story, one of courage, persistence and the value of team work.

One day I sat in a meeting bored out of my mind. I looked around and saw a painting of a little bushman drawing that looked like he was climbing out of his rock. That was the start of San the Bushman Drawing a story of facing fears and embracing opportunities.

The Gemmed Cloak was also one of my tales as a child. Originally it was about a nightingale, but now after it has been revamped it tells the tale of a witch seeking revenge, a stable boy and a King filled with greed.
The three stories turned into a book A Trio of Adventurous Tales, which was self- published in February 2015 by Partridge Publishing.

The last book I wrote started with a day dream, while on training, of an island of clouds, home to a village of elves, where a tree controlled time. It turned into a tale filled with magic and adventure as Tobi, an elf; try to save Time from the clutches of the Dark Wizard, Evilius.

Tobi and The Tree of Time was published in June 2015 also by Partridge Publishing.