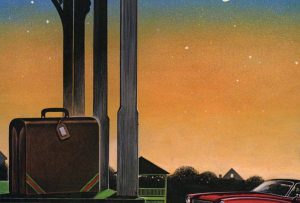 Family resemblances is a coming of age novel about a fifteen year old girl sent to spend the summer with her unmarried aunt, her mother’s younger sister. Both learn a great deal about each other. A sensitive, emotional novel. Aimed at teenagers, some content is considered sensitive.

This book, previously published but out of print, is now provided in creative commons by the author.

On the hottest days, my Aunt Augusta would drive around New Franklin with the windows rolled up, so that people would think the air conditioning still worked in the Buick she had inherited along with the house. The clear plastic cornucopias on either side of the rear window, which should have poured coolness on the back of our necks, were still quite noticeably there, but the remainder of the apparatus had succumbed to a mysterious illness some time ago.

Occasionally, when she got to an out-of-the-way place, she’d hit the four buttons by her left hand and all the windows would slide down at once to let in relief, but she may have done this only when I was with her, to accommodate my weakness and youth; alone, for all I know, she never let down her resolve. She almost managed not to sweat, as if a regal bearing would keep her cool.

Once when we were all visiting – my parents and I – my mother, red and hot, told her to her face it was absurd. Augusta, beautiful as she was, looked stony. I could see her in profile from where I sat in the back seat, and I was glad the Buick was big and I didn’t have to be any closer to her. Whose side to be on? There was a silence for half a block, and then she finally looked at my mother and said, “What they don’t know won’t hurt me.”

When I was fifteen and a half I went, or got sent, to visit Augusta by myself because my mother couldn’t put up with me. It was summer again, and I was unbearable because of a lost boyfriend. His name was Roger Andrew, singular; I called him Rodge; he was sixteen, and touched my breasts, which made me feel as if I might die of self-consciousness.

Lowry Pei is a writing professor, graduated from Harvard and completed a PhD at stanford. He has a Chinese father and American mother and grew up in the Kansas. Lowry loves writing and teaching writing, as well as Jazz and rock and roll.