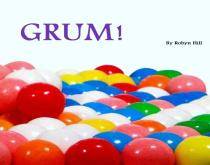 Grum – A story of two girls who discover magical bubble gum. The gum takes them on a series of magical and hilarious mishaps, such as sleeping with slugs, a magic pizzaria in the middle of the desert, and a troll who needs help fixing his bridge.

At first I wasn’t happy with the idea of spending the summer at my Aunt Victoria’s house. My dad, and his research partner, would be traveling to Africa to study plants for medicinal purposes. It wasn’t that I didn’t like my aunt, it’s just that I was going into 6th grade and spending the entire summer away from my home, and my friends, was not my idea of a radical summer. It would be the first summer away, and the first summer since my mom had died.

After we arrived at my aunt’s house, I realized it was not as bad as I had expected. The house was huge for one thing, and old. It was not old in a bad way, more in an interesting, spooky kind of way. The bricks were covered with stringy moss, and vines reached around the entire house like protective, bony hands. A lovely garden of different colored roses grew to the side, and behind was a wooded area with ponds, frogs, and many curious swamp creatures.

I waved to the car as my dad and his partner drove off. “It will be over before you know it, Carol,” Dad’s partner said while pushing his wire glasses further upon his nose. “I love you and entertain yourself with books, Sweetheart, lots of books, especially math!” Dad yelled out as he waved back, and then the Volkswagen pulled out of the driveway.

“Really, Carol, time will go by quickly”, my aunt said and she picked up my suit case and walked into the house. “Don’t fret and make the best out of the situation. When life gives you lemons, why I say make lemonade!” she sang out happily. I remembered my parents and teachers always saying that, but I didn’t really like lemonade either. We walked up a spiral iron staircase and down a dimly lit wooden hall to the room that would be mine for the next couple of months. My aunt opened a tired creaking door. I was pleasantly surprised to find a cozy room with a large brass bed. There were many filled bookshelves and a white fluffy cat. The cat was curled in a ball atop of the thickest down comforter I had ever seen. He had a black spot the shape of a diamond on his head. He looked up at me, stretched his fat paws, then retreated into his curl and fell back to sleep. “That would be Marlin, my cat, and
it seems he has already decided to bunk with you while you are here,” my aunt said. “Make yourself comfortable and come down and join me for a glass of lemonade when you are finished.” Great…I thought to myself, more with the lemonade, and I reached forward to unpack my things.

I had my suitcase, filled with summer clothing, and one large geometry book to unpack. Since my mother had passed away, my grades had slipped and I had received a D in math because I didn’t understand geometry. Dad wanted me to study a geometry text book before school started so I would be ready for 6th grade math. I rubbed the top of the book and remembered how my mother would help me with my homework during the evenings. Those were the days when I had straight A’s. I grabbed a pillow and began to cry. I can’t do anything on my own anymore. It just didn’t seem fair that cancer had taken my mother and here I was alone in a huge house with a relative I barely knew. I felt a light tickling on my nose and opened my eyes. There stood Marlin, looking at me with  crossed green eyes, gently kissing my cheek with his rough tongue. It was strangely soothing. Marlin made himself cozy underneath my neck as I dozed off into a comfortable sleep.