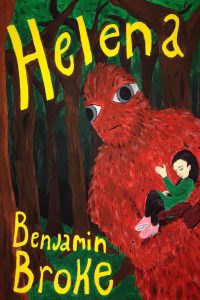 Yeti’s think people are imaginary, or is it people who think yeti’s are imaginary? Either way in this adventure that borders on science fiction we are taken on a roller coaster ride of what happens when a yeti rescues a little girl from a car crash where her parents are killed. The story is written from the yeti’s perspective, and elaborates on myths and supernatural.

A wonderfully written tale, this is one of Benjamin Broke’s many wonderful stories, more can be found on his Smashwords page, here: https://www.smashwords.com/profile/view/BenjaminBroke

The sound told Mawei that humans were close. It was a loud screech that almost sounded like a screaming bird, followed by a thunderclap that reverberated off of the craggy rock ledge above her.

Mawei was travelling in unfamiliar territory but she knew that a human road was nearby. Most yetis flee at the first sign of human activity, but Mawei was both young and curious, and her curiosity sometimes made her brave. She decided to investigate.

She was coming up the side of a snow-covered gully when the wind died down and she became aware of an intense smell. She didn’t know it was gasoline, just that it burned her nostrils and was highly unpleasant. She could also detect traces of exhaust, a smell she was familiar with.

Mawei climbed down a steep embankment to the road, which was covered in a thin layer of ice, and carefully followed it to a bend where she knew by the intensity of the gasoline smell that she was close. There was a drop off on the outside of the road and Mawei looked down at the remains of a violent wreck.

The car was upside down and smashed against a tree at the bottom of the hill. Mawei smelled blood and sap mixed with the gasoline and exhaust. She stood at the edge of the road and considered the mangled car below. A light snow had begun to fall and Mawei knew that she should leave the car and its unfortunate occupants and get
back to her travels.

She was on her way to a Gather and she still had a long way to go. Being late to a Gather was considered rude, and Mawei’s mother would be angry with her if she didn’t manage to get there on time, but something kept her from leaving. Human beings had been of great interest to Mawei when she was little, and it had even been said that she took after her uncle Rei, whose obsession with humans was legendary.

Mawei felt that she owed it to that younger version of herself to fully live this human moment. She got an all fours and arched her back so that if the human or humans inside the car saw her, they would think she was a bear. At eight feet tall, Mawei would be an exceptionally large bear, but she thought if anyone was still alive in the car she wouldn’t have to fool them for long before she could get away.

She descended the hill as a bear, and concentrated on darkening her auburn fur until it was almost black, a trick she had only recently mastered. The car’s wheels were still spinning and Mawei saw blood dripping from the broken
windshield. She approached cautiously and looked in a side window. It was a man and woman who had awoken from the dream of this world and left behind only messy corpses.

Mawei supposed that this was a common occurrence among humans, but she couldn’t help feeling sorry for the couple. She stood, not worried about looking like a bear anymore, and let her fur change back to its natural color. She put her nose near the open window. Mawei wanted to remember every detail of the sad scene.

It was the scent of shampoo that caught her attention. There was a trace of something sweets melling behind the corpses of the man and woman. Mawei walked around and looked through the broken-out back window of the car and saw two brown eyes looking back at her.

She jumped, startled, and looked again. It was a small human face, upside down and attached to a small human body in a shell that was strapped to the seat. The child looked completely calm, although being upside down had turned its face bright red.

The sympathy Mawei felt for this child was sudden and overwhelming. She knew that the dead bodies belonged to its mother and father, and that soon the child would be dead too.

Create a Book! – by FKB - This book takes readers through 10 simple steps to creating a book, including software, images, format, and publishing. This book is written in simple terms to be used as a guide by children or as a lesson plan by teachers or parents. If you create a book and want to share it on Free Kids ...

Survival Guide – There is Help - This is a survival guide and workbook designed specifically for teens or young adults who may have thoughts of self-harm. The ebook is available as a pdf which you can print and fill in by hand or edit using the pdf annotate tools and also as an editable odg file (Open Office Draw). Note the ...

Word Search – For Clever Kids of all Ages - There are many advantages to a fun book of word searches, for example, a fun, free, no battery game for all the family, improves mental fitness, memory, spelling, and vocabulary, and many others. Try out this word book with 26 x five letter word puzzles, one for each letter of the alphabet. Enjoy the fun! ...

Walk with Gandhi - An enlightening text on the life of Gandhi, containing enlightening snapshots of Gandhi’s life, with lots of questions for reflection, making it very suitable for school use – social studies, history, art, or English. The Haiku, images, and text reflect the remarkable life of Mahatma (‘great soul’) who brought freedom to India through non-violent protest. ...

Help Your Child Write an Outstanding Essay - How do you turn essay writing into something positive for your kids? Let’s face the fact that only some children enjoy writing essays. Typically, a lack of enthusiasm occurs when children need help understanding all stages of the writing process and lack writing experience. Time spent in a class may not be enough to understand ...

Observer Effect – A Christmas Story - Whizz-kid scientist Bradley Robinson knows precisely how to get more presents out of Santa. His plan involves lots of coffee and some electric shocks, neither of which Jack, his younger brother, is a fan of, but he doesn’t get much say in the matter. Of course, Santa isn’t the only person out and about in ...