The Adventures of Pigsley and Rio – To The Dam 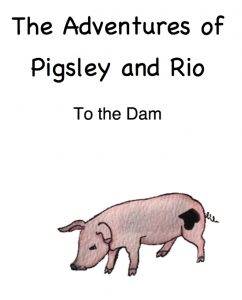 The second book in the Pigsley and Rio series, Pigsley and Rio race to the dam to cool off.  They meet a beautiful bird and Pigsley gets himself in a pickle.  Join Pigsley and Rio as they learn more about their new feathered friend and the importance of water safety.

Sample Text from Pigsley and Rio – To the Dam

The sun brightened the early morning sky, waking the animals on the farm.

Pigsley, the pig, trotted out of the barn where he slept wondering what adventure he should go on.

He headed in the direction of the cottage, where the people lived, hoping to meet his best friend Rio, the dog.

As Pigsley passed under the big tree, lots of tiny leaves rained down on his head. At first he was confused.
“Raining leaves?” he thought. “How odd!”
He looked up and saw the branches blowing in the wind:
this way,
that way,
every which way.
And the pig started dancing.

Read the full book by selecting one of the buttons below the post.

Read more books about animals below

The Smile – Inuit Fable - In the harsh Arctic winter a girl, her family, and her dog struggle to survive. When her parents go in search of food the girl has a dream and resurrects the village landmark which in turn brings them good fortune. The book is adorned with gorgeous Inuit inspired art. Terms in the book: inunnguaq – ...
Spread the love
Tags: Pigsley and Rio
EPUB copy -
Read Online -
Views:4730
Download Free PDF -
Downloads : 6802