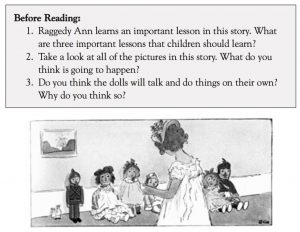 Raggedy Ann Stories, abridged and adapted from the original, contains 13 short stories about the classic rag doll and her friends. The text is from the US government English language department and is accompanied a picture glossary, and questions to aid comprehension. The language has been simplified for high-beginning level English language learners (with vocabulary at the first 1000-word level) and is appropriate for young learners. Illustrations are included in black and white.

Sample Text from the Book

Marcella liked to visit her Grandma’s old house. When she was at her Grandma’s house, she played up in the attic. Marcella found many old toys and things there.

One day, Marcella was up in the attic as usual. She was tired because she was playing for a long time, so she sat down to rest.

She looked around and saw a box in the back of the room. “What could be in that box over there?” she thought. She stood up and climbed over some old chairs and tables. Finally, she got to the box.

She opened it, but it was too dark to see. Marcella brought the box over to the window where she could see better in the sunshine.

She found a little white hat and put it on her head. In an old bag, she found some dolls wearing old clothes. And there was a picture of a very pretty little girl with long hair. Then Marcella pulled out an old
rag doll with only one button eye, a painted nose, and a smiling mouth. Her dress was made out of soft cloth. It was blue with pretty little flowers all over it.

Marcella was so happy. She picked up the rag doll and ran down- stairs to show it to her Grandma.

“Well! Well! Where did you nd her?” Grandma asked. “It’s old Rag- gedy Ann!” Grandma gave the doll a hug. “I forgot about her. She has been in the attic for fty years! Well! Well! Dear old Raggedy Ann! She needs her other eye right away!”

Marcella watched Grandma sew the button on Raggedy Ann. Grandma told Marcella how she played with Raggedy Ann when she was a little girl.

“Oh, Grandma! Thank you so much!” Marcella said as she gave Grandma a hug and kiss. “Raggedy Ann and I will have so much fun.” And that was how Raggedy Ann became part of the doll family at

Marcella’s house. This book is about Raggedy Ann’s stories. 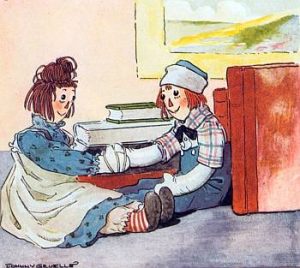