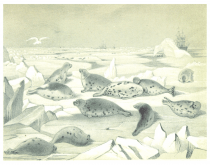 White Seal – A story of seals on the beach, and about striving for a better life. Contains some graphic content. One of the stories from the Jungle Book. A subtle message about conservation, environmental issues, and seal culling.

Seal Lullaby
Oh! hush thee, my baby, the night is behind us,
And black are the waters that sparkled so green.
The moon, o’er the combers, looks downward to fnd us
At rest in the hollows that rustle between.
Where billow meets billow, then soft be thy pillow,
Ah, weary wee fipperling, curl at thy ease!
The storm shall not wake thee, nor shark overtake thee,
Asleep in the arms of the slow-swinging seas!

Chapter 1 Sea Catch
All these things happened several years ago at a place called Novastoshnah, or North East Point, on the Island of St. Paul, far and away in the Bering Sea. Limmershin, the Winter Wren, told me the tale when he was blown on to the rigging of my steamer enroute to Japan, where I took him down into my cabin and warmed and fed him for a couple of days till he was ft to fy back to St. Paul’s again.

Limmershin is a very quaint little bird, but he knows how to tell the truth. Nobody comes to Novastoshnah except on business, and the only people who have regular business there are the seals. They come in the summer months by hundreds and hundreds of thousands out of the cold gray sea. For Novastoshnah Beach has the fnest accommodation for seals of any place in all the world.

Sea Catch knew that, and every spring would swim from whatever place he happened to be in—would swim like a torpedo-boat straight for Novastoshnah and spend a month fghting with his companions for a good place on the rocks, as close to the sea as possible. Sea Catch was ffteen years old, a huge gray fur seal with almost a mane on his shoulders, and long, wicked dog teeth. When he heaved himself up on his front fippers he stood more than four feet clear of the ground, and his weight, if anyone had been bold enough to weigh him, was nearly seven hundred pounds. He was scarred all over with the marks of savage fghts, but he was always ready for just one fght more. He would put his head on one side, as though he were afraid to look his enemy in the face; then he would shoot it out like lightning, and when the big teeth were frmly fxed on the other seal’s neck, the other seal might get away if he could, but Sea Catch would not help him.

The audio version of this book is available here: https://www.free-ebooks.net/audiobook/White-Seal

The Smile – Inuit Fable - In the harsh Arctic winter a girl, her family, and her dog struggle to survive. When her parents go in search of food the girl has a dream and resurrects the village landmark which in turn brings them good fortune. The book is adorned with gorgeous Inuit inspired art. Terms in the book: inunnguaq – ...
Spread the love
Tags: books about seal, Children's Book, childrens book about seal, free childrens book, Free Kids Books, free kids stories, Rudyard Kipling, white seal
Hard copy -
Views:3883
Download Free PDF -
Downloads : 11736