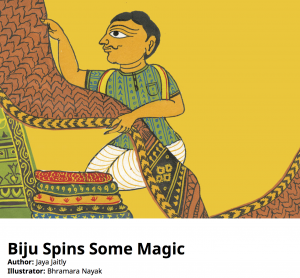 Biju Spins Some Magic, a cultural children’s story for early to middle grades, Biju accompanies his father to Delhi to sell the saris.

Biju and his family are weavers in rural Odisha. They create beautiful fabrics to sell in the cities of India and abroad. In this tale of Biju’s adventures find out how he  impresses a city boy with his magic skills.

Jaya Jaitly’s fun- filled story is illustrated by Bhramara Nayak in the patachitra style, a traditional painting of Odisha, India

Biju Spins Some Magic is a story about a young boy in rural India which provides a wonderful example of how children in other cultures live.

Text and Images from Biju Spins Some Magic 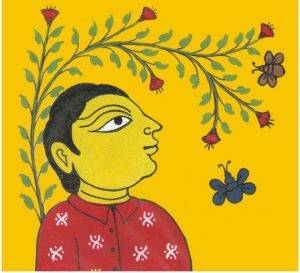 It was a hot afternoon in the quiet, dusty village of Jilminda, near Sambalpur, in Odisha. Biju, all of nine years old, sat under a tree waiting for his father. He was going with Bapa on a long journey.

A fly buzzed near his ear. The glare of the sun along with the steady clack-clack of the handlooms from the huts nearby made him feel sleepy. He thought he would doze a bit in the company of the brown dog that had come to share the shade with him, but the dog was panting so loudly in the heat that it kept Biju awake.

Biju, like most of the children in his village, did not go to school. He had wanted to go to school but his parents had said there was no use in him learning things that had nothing to do with their weaving profession. He would get just useless thoughts in his head about working in an office. 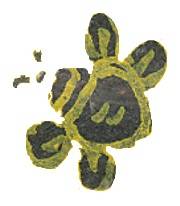 So Biju tried to convince himself that school was no fun at all because the boys who did go looked miserable and had to carry heavy bags full of books. A friend’s brother had got himself a ‘degree’ after attending school but it had not helped him get a job. He had gone up and down many stairs in the tall office buildings of Mumbai but had been
offered jobs only at teashops, newspaper kiosks and by janitors. He was back at home now, helping his father weave ikat saris, which he took to Mumbai once in a while to sell to a wholesale merchant.

This book is created by Dastkari Haat Samiti,  a large organization of Indian craftspeople, working to improve the social and economic status of people engaged in traditional handicraft skills. Local forms of painting and craftwork have been used to illustrate this series of four stories to encourage the sharing of varied cultural expressions. This work was made possible with the support of UNESCO, New Delhi.

This awesome free children’s story is provided in Creative Commons by Pratham and the Storyweaver platform.

See more books about Culture below