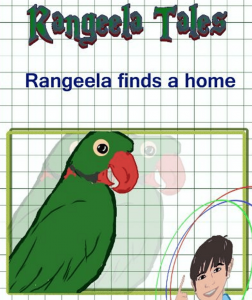 Rangeela Finds a Home, is the first book in a series of adventures Rangeela’s Tales, featuring a young boy and a parrot. Rangeela winds up very beaten up and nearly lunch for the cat when the young boy Navjyot rescues the near-to-death parrot and wins his trust. Navyjyot finds that Rangeela is a very special parrot and has very special talents.
Rangeela Tales is a series of stories about the duo, and also about Navjyot’s nosy cousin, Nimi, and her black cat, Robber, who is on a mission to end Rangeela’s existence.

This book is provided by permission of the author to publish on FKB, it is copyright and can be used for private use only.

Text from Rangeela Finds a Home

Robber was staring at the ground and taking small, mincing steps. Navjyot guessed he had spotted a bird or a mouse.

“Stop! Stay! Robber, you naughty cat!” he yelled and ran out of the house.

Crouched low, with his tail up in the air, Robber fixed green blazing eyes on Navjyot and let out an angry meow.

“Scoot! Ask Nimi to feed you!” Navjyot shooed Robber away and picked up the bundle of green feathers. The parrot was alive but its eyes were shut and it did not move. It was burning up with fever. Its feet were tied with a thin wire and there was a string around its neck. One wing was injured.

Navjyot took the parrot into his room and placed it on the table. He sprinkled some water over it. The parrot did not stir. But for the tiny movement of the chest, it looked dead.

Navjyot sprinkled some more water and started fanning the parrot with a cardboard sheet. The parrot opened its eyes and shut them again. Navjyot held a saucer with water to its beak and patiently waited for it to take a few sips. He cut away the string and removed the wire. He also applied antiseptic cream on the cuts left by the wire.

“What do you have here?” Nimi asked, making Navjyot jump. He hadn’t heard her come in. She was holding Robber in her arms and he was wriggling.

“Take your cat out!” Navjyot hissed, picking up the parrot.

“Is that a parrot? May I hold him?” Nimi asked.

“Navjyot, don’t be mean! All I want is to hold the parrot. Does it speak?”

When Navjyot refused to give her the parrot, she stuck out her tongue at him and threatened, “I’ll tell Grandpa!”

Navjyot got rid of her and locked the door. He fed the parrot some more water and some nuts. He remembered parrots loved guavas. He would get one from the kitchen. When he opened the door, Robber was sitting on the doormat. “You monster cat, stay away from my parrot,” he warned.

The parrot did not eat the fruit. It did not get up on its feet either. Navjyot took the parrot to a vet. The vet was hopeful. “He’s young and strong. He’ll live.” For the next five days, Navjyot gave the parrot medicines, handfed him and guarded him from Robber.

Robber continued to try to get into Navjyot’s room. He almost succeeded getting in through the window except that the parrot gave a loud squawk.

Robber’s behavior led to many a quarrel between Nimi and Navjyot. Navjyot wanted Nimi to mind Robber and keep him away from the parrot. Nimi said he was being mean to her.

“Robber is always outside my door. Someday I’ll step on him!” Navjyot threatened.

Nimi ran to Grandpa. “Navjyot says he will murder Robber! Tell him he is not to even look a Robber.”

Navjyot was fed up of playing hide and seek with Robber. He had an idea. “Grandpa, may I move into the room outside?”

The room was actually a long verandah with a sloping roof, enclosed with a trellis set in a two foot high wall, with a door at the centre. Navjyot knew his father had used it as a boy.

Grandpa agreed. “History is repeating itself. The verandah was converted into a room because your father and his sister, Nimi’s mother, were always squabbling. He said she did not let him work on his science projects and she complained he was being selfish and mean, and excluding her.”

The room was filled with old furniture and junk. Grandpa told Bond to make it ready for Navjyot to move in.

Bond did all the work in the house. He cooked, cleaned, did the gardening, marketing, and anything else that came up. Grandpa had given him shelter and employment when he was homeless and looking for work.

Bond cleared out the room. Grandpa told him to keep the furniture Navjyot could use and remove everything else to the junkyard. Navjyot selected a bunk bed, a bookshelf, a cupboard, a table, and a chair. The cupboard and the table were a little damaged but Bond was handy with tools. He repaired them and also patched up the roof.

Navjyot found a bird cage in the pile of junk. It was twisted and the door did not shut properly. Bond straightened it out with a pair of strong pliers and a hammer. Navjyot painted it red. Nimi found a tennis racket she liked and Bond promised to repair it.

“That bird cage belonged to your mother,” Grandpa told Nimi.

“Navjyot! Give me the cage. It’s mine!” Nimi demanded.

But when Grandpa told her that the tennis racket had belonged to Navjyot’s father, she agreed to let him have the bird cage.

Navjyot took the cage into his room. The parrot was pecking at the bowl of grain. He cocked his head to one side and watched Navjyot come closer. Navjyot placed the cage on the table and propped open the door.

He said, “I don’t like to keep you in a cage because birds are meant to fly. But Robber is always lurking around you. He will snap you up at the first chance he gets. Please get inside the cage. You will be safe. When you are strong enough to fly, I’ll set you free.”

Navjyot liked talking to the parrot. The parrot always had a listening appearance and fixed an eye on Navjyot when he spoke. It did not matter that he did not understand a word.

“Step into the cage whenever you feel comfortable with the idea,” Navjyot said. The parrot immediately hopped inside the cage. Navjyot was delighted. Now he could carry the parrot with him instead of confining him to the room. He did not have to worry about Robber either.

Navjyot’s new room was ready in three days. Though Bond helped, Navjyot did most of the work. The room and the furniture had a fresh coat of paint and Grandpa ordered new mattresses for the bunk bed.

The parrot had also helped. Navjyot had shown him the color chart and asked him to pick the colors for the room. He had touched green and yellow with his beak!

Nimi insisted Grandpa should get her room painted in black because Robber put his paw on black in the color chart. When Grandpa refused, she sulked until he promised to buy her a new cat bed if she did some chores for him.