Sindi and the Moon – Ready for the first day of school

Sindi and the Moon is a story about Sindi’s experiences preparing for and going to school for the first time. Sindi is getting ready for her first day of school, but she’s a little nervous. Will there be only reading and writing, or will they let her sing and dance too?

Download the full picture book version of Sindi and the Moon or read the flipbook online by selecting the buttons below this post or scroll down to keep reading.

This is another awesome picture book for young children brought to us by BookDash. BookDash is a South African Non-Profit aiming to get 100 books in every child’s hands by the age of 5, when this post was published they have given away more than half a million hard copy books, Free Kids Books is one of BookDash’s supporters with our FREE Hardcopies project.

Sindi and the Moon 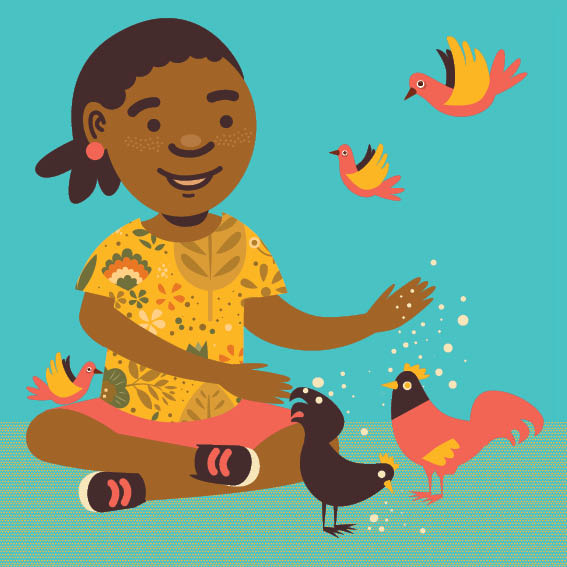 Sindi was a very lively little girl who loved to sing and dance. She lived on a farm with her parents and her Gogo.

Sindi enjoyed following Gogo around and feeding the animals. 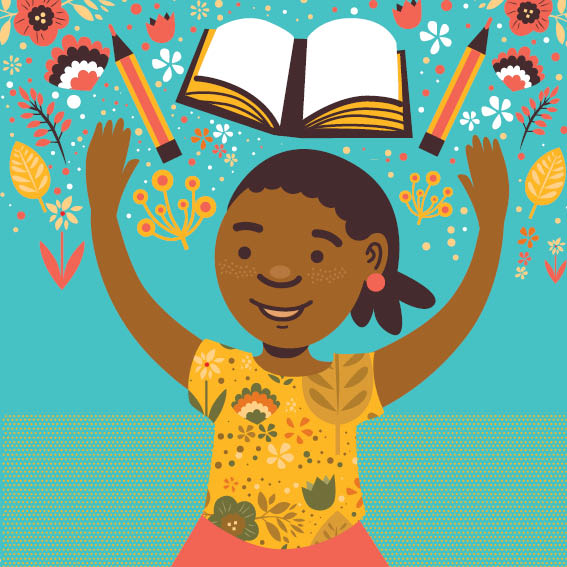 One evening while Sindi and her family were having dinner, Sindi’s mother had something to tell her. “Sindi,” she said, “after the long Christmas holidays, you are going to go to school.

”Sindi was so excited. She was happy that she would finally get to learn how to read and write. 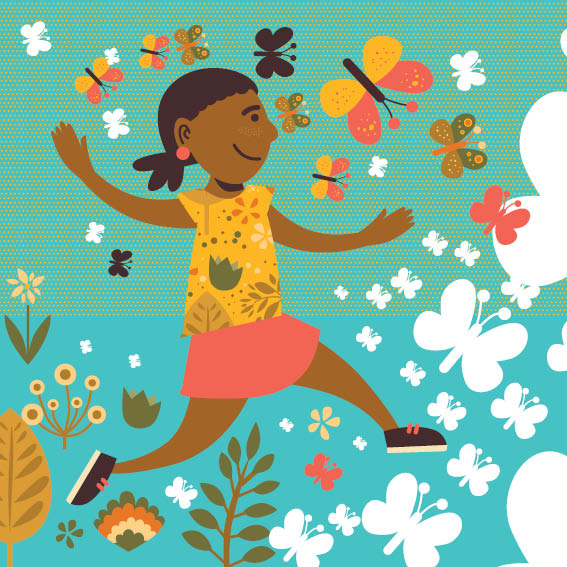 When Sindi was happy, she danced. Her joy spread to the farm animals. The dogs barked more loudly. The cows mooed more beautifully. The butterflies flapped their wings and landed in her hair. 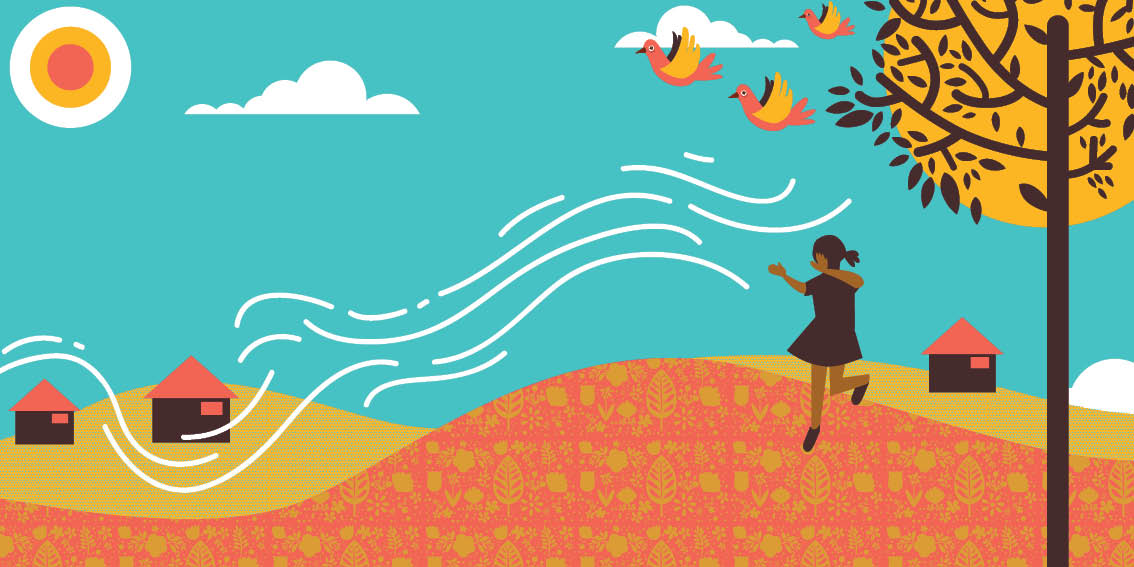 When Sindi danced, she swayed from left to right, as if she were pushed and pulled by the wind. She sang along with its soft, slow music. 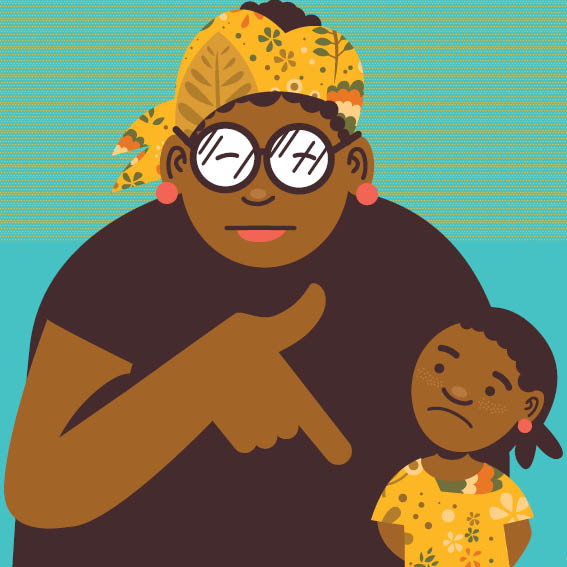 “School is very serious,” Gogo said. “There is no more time for song and dance, only learning.” This did not make Sindi happy at all. 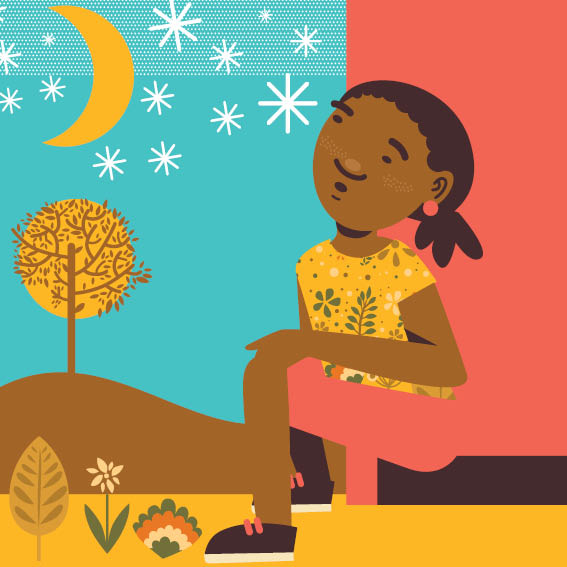 The night before school started was very hot. Sindi just could not sleep! She tiptoed outside and sat on the stoep, looking up at the dark sky. The moon was big and bright and beautiful and the stars were twinkling. 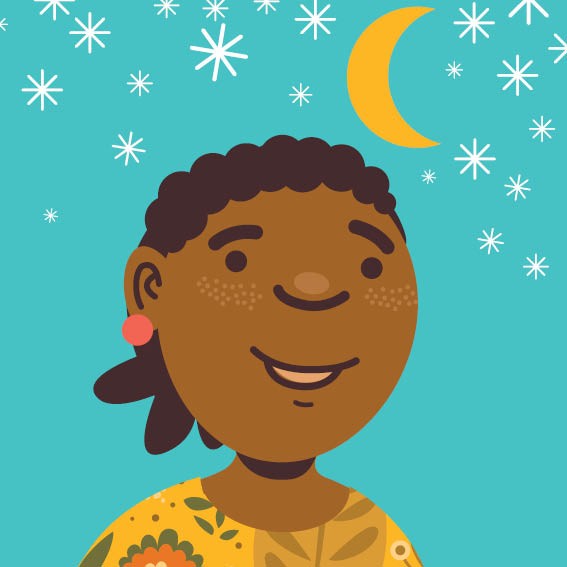 Sindi spoke to the beautiful moon. “Dear moon so bright,” she said, “are you afraid of the dark? Is that why you ask the stars to keep you company?”

“I am going to school tomorrow, what will it be like?” 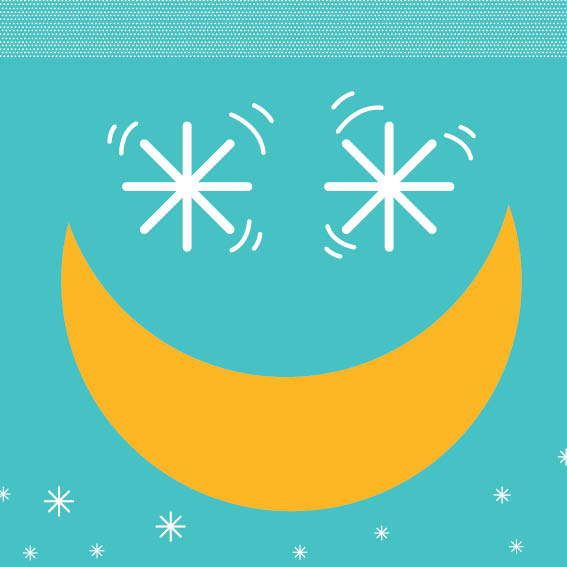 Sindi started to sing. What she saw next made her rub her eyes in disbelief. Was she dreaming? The moon was smiling! And the stars were dancing to her song! 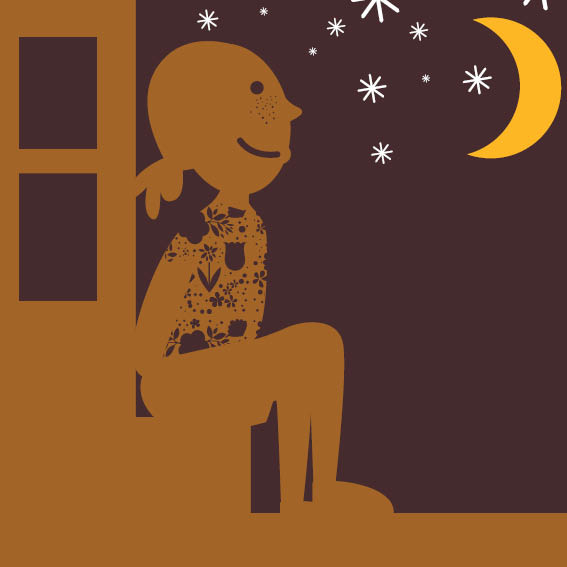 A gentle voice spoke to her. “Dear little Sindi,” the voice said. “School is a wonderful place. You will learn many things: to read and write, to sing and dance and to make many friends.”“But for now, Sindi, you must rest. Tomorrow will be beautiful.” 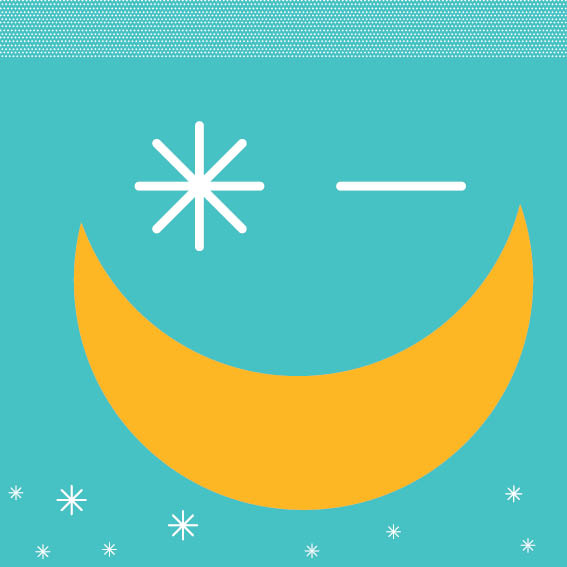 Sindi had never seen anything this amazing. She wanted to wake everyone up and show them the talking moon and dancing stars.

But the moon stopped her. “Shhhh, Sindi,”it said. “This is our little secret.” The moon winked.

Sindi returned to bed, comforted by the moon’s wise words, and slept peacefully. 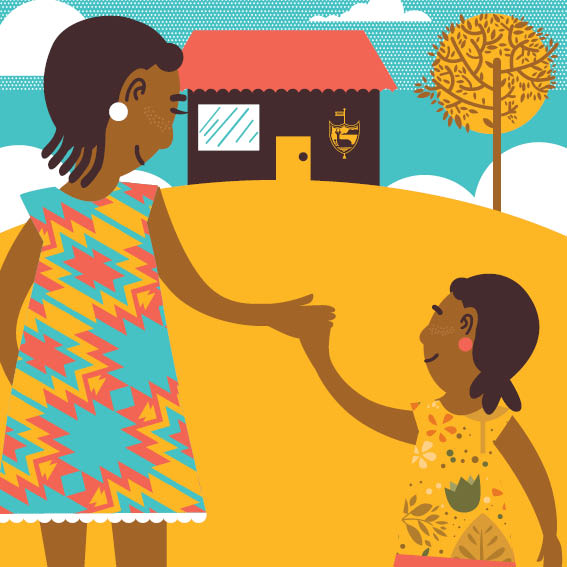 The time came for school. Mama held Sindi’s hand as they approached the school.

She was confident that the day would be beautiful, because the moon had told her so.

Children were arriving with their mothers and fathers. They all looked excited. Sindi could not wait to make friends. 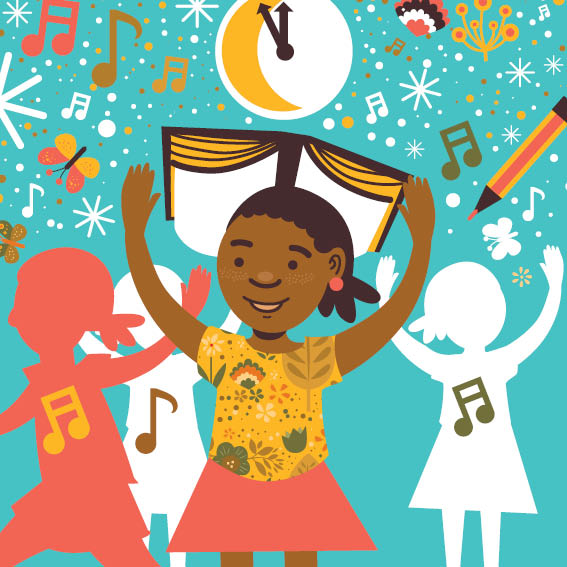 By lunch time, Sindi loved everything about school.

But also I will sing and dance!”

And all of Sindi’s new friends danced with her, just like the animals had done. They clapped their hands and sang to her tune.

<End of Text from Sindi and the Moon>

Sindi and the Moon

This work is licensed under a Creative Commons Attribution 4.0 International License. This means you are free to share (copy and redistribute the material in any medium or format) and adapt it (remix, transform, and build upon the material) for any purpose, even commercially, as long as you give appropriate credit, with a link to your source, and indicate if changes were made. You may do so in any reasonable manner, but not in any way that suggests the licensor endorses you or your use.

Sindi and the Moon Reading Comprehension and Writing Questions

Answer true or false to the following questions:

1. Sindi loved to sing and dance.

2. At first Sindi was happy about going to school.

3. Sindi was not nervous about school.

Fill in the gap:

9. Decribe your feelings before your first day of school or kindergarten.

10. Describe your feelings after your first day of school or kindergarten.

If you enjoyed Sindi and the Moon, see more books like this in our BookDash Category below

I Can Dress Myself – Wordless Book - I Can Dress Myself is an amusing short wordless book about a child getting herself dressed while Mum is sleeping. This story was brought to us by BookDash, if you enjoyed this story, see more stories from BookDash below.  Spread the love
Egg – A simple mystery - In Egg Crocodile, tortoise, penguin, and chicken find an egg, is it theirs? If not whose is it? Find out in this simple book for very young children. Text from Egg Egg My Egg? Not My Egg. My Egg? Not My Egg. My Egg? Not My Egg. My Egg? Not My Egg. My egg. Our ...
Tig’s World – An important question - In Tig’s World Tig asks her mom who is a scientist and her dad who is a writer what happens to the people on the bottom side of the earth and why they don’t fall off. Whose answer is right? Author: Sam Wilson, Illustrator: Dorian Dutrieux Sample Text from Tig’s World Tig’s mom is a ...
The Biscuit Jar Must Fall – Adventure in team work - The children are offered a reward of biscuits if they clean up, but when it’s time to get the biscuits their minder is nowhere to be found. An adventure in teamwork results as they endeavor to get the biscuit jar down from the shelf. Will they get it down in the end? Find out in ...
The Sea – Playing with Waves - The Sea a story about a girl and her family who went to the beach to escape the heat. She soon realizes how much fun it is playing with waves. This book has a lot of repetitive words with illustrations perfect for young children to learn new words. This book is brought to us by ...
Where’s That Cat – Wordless fun - In Where’s That Cat, a wordless book, the inventor’s daughter goes looking for her missing cat. Adventure and humor follow in the resulting hunt. Sample Images from Where’s That Cat Illustrated by Thea Nicole de Klerk Written by Sam Wilson Another great book brought to us by BookDash, ensuring more books in children’s hands. See ...
Why Do Birds Sing At Dawn – Fun folktale - In Why Do Birds Sing At Dawn we find a fun folktale style story about birds singing at Dawn. Mama bird goes on a mission to save the forest and the babies are left alone, they miss her, learning to sing gives them hope she will return and she does. Illustrated by Emmanuel Grebo, Written ...
Teju’s Shadow – Dealing with fear - In Teju’s shadow, Teju’s Mama helps him get over his fear of the dark and fear of his shadow. A cute story for young children who are afraid. Illustrated by Ndumiso Nyoni, Written by Sope Martins Sample Text from Teju’s Shadow “What’s that?” Teju hides. “It won’t find me here!” He runs. “Why are you ...
Mama Antelope’s House – Fun Early Reader - In Mama Antelope’s House we see lots of repetition which makes it a great early reader, or just a fun story for young children. Hare plays a trick on the other animals, can they get into Mama Antelope’s House? Who is making all the noise? Find out more, learn a lesson in manners, and have ...
Auntie Boi’s Gift - In Auntie Boi’s Gift a family visits the post office to collect a gift from their Auntie, the girls have fun guessing what the gift might be. Illustrated by Ndumiso Nyoni, Written by Baeletsi Tsatsi Sample Text from Aunti Boi’s Gift Kopano and Rea are going to town for the first time ever! “Remember to ...
Spread the love
Tags: bedtime story, going to school, pre-school book about feelings
EPUB copy -
Read Online -
Views:2453
Download Free PDF -
Downloads : 4149