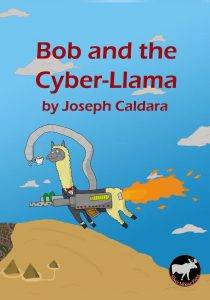 Bob And The Cyber-Llama- The story follows the adventures of Bob Halibut, a young man who inherits a tremendous fortune from his grandmother. After meeting her cybernetic llama butler, Jeeves, Bob learns that 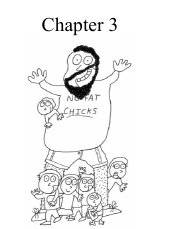 , in her youth, his grandma was an Indiana Jones-style treasure-hunter. Under Jeeves’ guidance, Bob follows in his grandmother’s footsteps and travels to Egypt, where he discovers a lost civilization living underneath the pyramids, dodges booby traps, and combats an ancient army.
By Joseph Caldara

Sample Text from Bob And The Cyber-Llama

Bob’s mother had told him hundreds of times that it wasn’t polite to stare, but he couldn’t help it. The jowls of wrinkly fat that had overtaken his grandmother’s chin undulated so much when she talked that he couldn’t look away. It was like a vast, mountainous, jagged wasteland of semisolid pudding with little hairs sticking out at random intervals. He had long since forgotten what they had been talking about and was instead counting the various boils and moles like he was looking at a blubbery “Where’s Waldo” puzzle.

“Well, what do you have to say, Bob dear?” Grandma Edwina said, snapping Bob out of his trance.
“Uh…what was the question again, grandma?”
“I said, have you found another job yet?”
“Oh,” Bob said, shifting uncomfortably on the orange leather couch, “No, grandma. I’m still working at Porkburger.”
“Hm,” Grandma Edwina grunted, “I don’t see why. I’ve heard you complain about it at least eighty times.
“I know, grandma, but-“ “But nothing, Bob. You’re talented. If Louis Armstrong and Carrot Top had a baby, it’d be you. What is it you’d like to do with your life?”
“I…er…don’t know right now.”
“That’s Grade-A, USDA-approved, prime-cut bull plop, Bobby. You’re my grandson! You’ve had a fire in your toiletcleaner-water blue eyes ever since you were the size of dachshund.

And besides, you’re willing to spend more than five minutes talking to me. That has to count for something. Now what do you want to pursue more than anything in the world?”
“I’m not sure…something adventurous.” Without knowing it, Bob cracked a smile, “Something exciting…and a little dangerous.”
“Really…?”
Bob’s smile vanished. “But I mean, I do need a steady job and Porkburger pays well.”
“Oh. Do you need some money?”
“No, grandma,” Bob said. He did need money, but he didn’t like asking Grandma Edwina. And he knew she had already given quite a bit of cash to the Orphans Who Look Like Rob Schneider Fund, which meant her money management skills had likely gone the way of her good looks.
“Well, let me know if you do,” she said, scratching herself,
“Just don’t move back in with your parents or whatever it is you young folks do these days. And remember that you have a lot going for you: you’re smart, you think quickly, and you have a good heart. And you smell like beef jerky.”
“Why do you always remember my scent, grandma?”
“Oh, I remember everyone’s smell, dear. Now, how about joining me for a game of Scrabble?”
Bob heard a knock at the door. Without waiting for an answer, an orderly stepped in, carrying a syringe that would have scared the beard off Attila the Hun.
“Mr. Halibut, I’m afraid I’m going to have to ask you to leave,” the orderly said, wiping his nose on his sleeve, “I need to give your grandmother her nightly painful injections.”
Bob sighed. “Okay,” he said, “Bye, grandma. I have some free time tomorrow afternoon, so I’ll see you then.”
“Just don’t waste your night listening to that ‘How to Enhance Your Relationships through Dialogue’ CD again. Light
off some fireworks or something.”

Maestro Orpheus and the World Clock - In this dream-like tale, Fred is visiting his grandfather when time suddenly stops. Setting out to discover why, Fred meets Maestro Orpheus and his magical lyre. Together they begin a musical adventure along The Corridor of Time, on their way to wind The World Clock. Drawing on a broad range of classical music, by composers ...

Tree Root Cavern and the Cryptic Discovery - THE ADVENTURE BEGINS – When four new friends stumble upon a cavern at the bottom of a large Baobab tree in the backyard of the Walborgs’ foster home, they make a startling discovery that sets them on a supernatural journey. Follow along as Ryan, Lisa and the nerdy twins, Stacy and William solve secret codes, ... 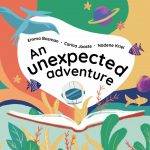 Robin Hood – Mashed Myths - A tale of Robin Hood and his Merry Men like you’ve never heard it before. King Prince John and the Sheriff are trying to capture Robin Hood with some not very cleverly disguised traps, and Robin Hood continues to rob from the rich and give to the poor but with some entertaining twists. MASHED MYTHS ...

Megan and the Princess of Death - In this second Megan mysteries book, we find Megan after following Frits down a cable car line, trapped in another strange world, The Hopah Place, with an annoying princess. Megan and Frits must journey through a series of scary-creepy caves to find their way back home, but first, she must solve three riddles. Will Megan ...

Bob And The Cyber-Llama - Bob And The Cyber-Llama- The story follows the adventures of Bob Halibut, a young man who inherits a tremendous fortune from his grandmother. After meeting her cybernetic llama butler, Jeeves, Bob learns that, in her youth, his grandma was an Indiana Jones-style treasure-hunter. Under Jeeves’ guidance, Bob follows in his grandmother’s footsteps and travels to ...