Pisu’s Revenge is a middle-grade fantasy novel about the adventures of Tefnut, a reluctant heroine and DFOA (d 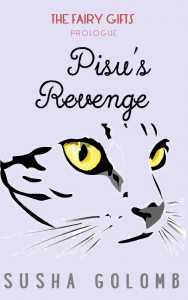 ominant Female Over All), also a cat.

Tefnut is required to keep order in a place called Ailuria (The Kingdom of the Cats), a difficult task when the cats, obligate carnivores, are not allowed to eat anyone.

Pisu’s Revenge is a prequel to the series called The Fairy Gifts. In the first book Magic Sucks, the heroine of the series is ten year old Miriam Mermelstein, who’s adventures are largely a result of her cat, Tefnut. Pisu’s revenge is all about where Tefnut came from and why she eventually came to the human world.

Warning! With very few exceptions, all of the characters are cats. 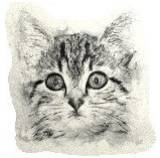 I was a pretty happy cat when I was young, born and raised in Ailuria, a little country by the sea, tucked into a small corner of The Greater Elf Kingdom.

Because of the strict laws in The Greater Elf Kingdom about not eating other people– and everyone here counts as people: fairies, animals, even bugs–my mother never taught us to hunt, but all our games were about catching stuff and destroying it. The shredding and ripping was the best part, the climax to an intense game of stalk and pounce. We loved it.

There were four of us, but my brother Pisu was the biggest, the strongest and the most fun to be with. I adored him. Now he’s in trouble, nothing new for Pisu, but I don’t know if I’ll be able to help him this time.

It was easier when we were younglings. Not being able to eat anyone leaves a lot of wiggle room, especially for kittens, and Pisu wiggled better than anyone. There were always ‘accidents’. I usually got blamed for the ‘accidentally’ squashed beetle, and Pisu got off the hook. I didn’t mind.

As we got older and more independent we spent more time apart. Once, while I was sneaking around practicing my stealth mode, I caught a flash of Pisu’s orange stripes through the bushes and heard a chirpy little cricket voice begging for mercy. There weren’t any squashed crickets afterwards so I assumed that the game finished and the cricket had moved on.

When we were six months old, Mom kicked us out. It was time for us to move on, too. I knew exactly what I wanted to do. I became a barge cat.

This is a prequel to the Fairy Gifts series, featuring middle-grade fantasy novels.

The other books from Susha Golomb are available on Free Kids Books’ main page here:

See more books about Fantasy below

If you enjoy this genre, check out some of our other chapter books, here: https://freekidsbooks.org/reading-level/older-children/