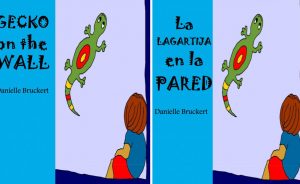 Gecko On The Wall Spanish Bilingual Children’s Stories – A very kind student in Argentina who is starting out on her career as a translator has been translating many of our books into Spanish. I’ve just received this file with Gecko on the Wall, a short rhyming book, translated into Spanish.

She first wrote to me about Mac and Dipper, to advise me she had translated it into Spanish as an assigned text in her university course – wow, Mac and Dipper (the characters responsible for the very beginnings of FKB) are a prescribed text in Buenos Aires!

The attached book here is a translation of gecko on the wall into a spanish bilingual children’s stories, another book of mine from our early days, and one of my favourites. Translating rhyme is so much harder, I sometimes wonder myself how it is done. This is the second time I’ve had a rhyming book translated (see Bugs by Numbers) and both times the authors were kind enough to provide explanations of differences, Noelia has going one step further to help those learning Spainsh by providing this table that shows you how the rhyme has been translated.

Gecko in the Wall (Literal translation of rhymes)

All nouns in Spanish are either feminine or masculine independently of the gender of the animal. “Lagartija” (gecko) is feminine even if the gecko in question is a male, so all the adjectives and articles used are for female gender.