The Princess, The Dragon, and The Very Bad Knight 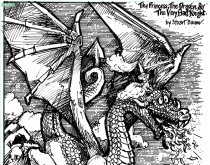 The Princess, The Dragon, and The Very Bad Knight – Usually knights rescue Princesses from dragons, or do they? Find out in this imaginative and highly entertaining medium length story, told in story-teller style making it fun to read aloud. Another great story by Stuart Baum from Stuart’s Stories.

Sample Text from The Princess, The Dragon, and The Very Bad Knight

Our story begins with the sound of a dragon’s egg hatching. The sound attracted the Royal
Dog, which sniffed at the closet where Princess Nyssmah had stashed the dragon’s egg. The Royal
Dog attracted the Royal Housemaid who was sure there was Some Sort of Animal in the closet.
The Royal Housemaid was afraid of many things. But, more than anything else, she was afraid of
Some Sort of Animal in a Closet. She went to get the Royal Steward who went to get the Royal
Butler who went to get the Royal Exterminator (who is in charge of removing A.ll Sorts of Animals
from closets or from anywhere else.) The Royal Exterminator opened the closet door and found a
baby dragon.

All this excitement attracted Princess Nyssmah, who was not afraid of Some Sort of Animal in
the closet – especially since she knew exactly re&ch sort of animal was in this closet. The excitement also attracted the King.

“Can I keep him?” she asked
The Royal Steward quickly said, “No.”
Princess Nyssmah put on her very best “I Love My Daddy Face” and asked the King, “Can I
keep him, oh Daddy that I love? Pleeease?’

“Of course,” said the Ring. The Royal Steward threw up his arms and shook his head and
rolled his eyes and sighed a long sigh.

See more books about dragons below

Danny the Dragon - Danny the Dragon was always causing problems with his fire, so the other dragons decide to teach him a lesson. An unlikely friend helps him out. This picture book is a cute and fun rhyming dragon tale with wonderful colourful illustrations. Another great free kids book provided in creative commons by StoryWeaver and Pratham. By: Rasana Atreya ...

The Night Before - The Night Before – Have you ever thought there was a dragon chasing you? Did you wonder what terrible things they might do when they catch you? This award winning, beautifully illustrated, rhyming picture book, describes the adventure of a boy running from a huge, scaly dragon. It’s trickery and games as they try to ...

A Way with Dragons – Historical Welsh Fiction - A Way With Dragons features the adventures of Welsh twins Cash and Cary and a small dragon. Recruited by the small dragon for an important task the twins travel back to the time of Merlin and the Knights of the Round Table. An exciting fantasy adventure featuring Welsh and folk history and a few dragons. Author: Nick Creech Sample Text ...
Spread the love
Tags: and The Very Bad Knight, Children's Book, free childrens book, Free Kids Books, free kids stories, Stuart Baum, The Dragon, The Princess
Hard copy -
Views:14789
Download Free PDF -
Downloads : 45778