Who Will Save the Planet – An adventure in climate change activism 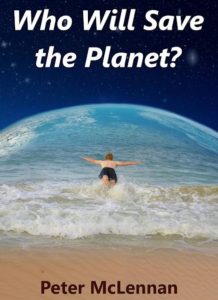 In Who Will Save the Planet, fourteen-year-old Jason can’t work out how to get climate change fixed—until he saves the life of the mysterious and powerful Graham. Graham promises a reward, and Jason asks him to do something to stop climate change. The request is caught by the media, so Jason thinks the man’s trapped and has to keep his word. But Graham’s got other ideas.

A battle of wits ensues as Jason tries to stop his captive from squirming out of his promise. Encounters that initially sound like fun end up getting heavy, and Jason’s summer holidays get messed up by pushy reporters and resentful townspeople—not to mention a professor who seems to be on both sides at once.

Jason finds that things aren’t as simple as he first thought. With a deadline approaching, he has to decide whether to force Graham to honour his promise, or admit that he could actually be mistaken.

To read the full ebook of Who Will Save the Planet, download (pdf or epub) or view the flipbook online by selecting the buttons below the post.

Sample Text from Who Will Save the Planet: Chapter 1 Preparations

‘Idiot!’ said Jason. He made his hand into a pistol shape and fired an imaginary bullet into the car’s radio.
‘Keep your hands on the wheel,’ said his father, staring through the windscreen with eyes wide open.
‘Well, he is an idiot.’ Jason skidded the car slightly as it rounded a corner on the dusty track.
‘That’s the Prime Minister you’re talking about.’
‘Then he should know better.’
‘You just worry about your driving. And be careful. This isn’t our car, you know.’
Jason kicked it up into third gear, this time without eliciting any crunching sounds from the gearbox. How dumb that he still had to wait for years before he could get his license, when he could drive perfectly well right now.
The radio continued on with its story:
‘So, Prime Minister, does that mean you won’t be signing up to the emission control targets at the Rotterdam Environmental Conference next month?’
‘I didn’t say that. I’ll be announcing the government’s position on the Rotterdam targets in a few days time. My point is simply that last month was the coldest November we’ve had in over a decade, so global warming isn’t obvious.’
‘He’s got you there,’ said Jason’s father.
‘No, he hasn’t. Just because one month was cold means stuff all. You can’t just look at one month—’
‘Watch out for that tree!’ Jason’s father gripped the dashboard in front of him with both hands.
‘I can see it. I do have my glasses on, Dad.’ Jason deftly manoeuvred the four-wheel-drive around the gum, secretly enjoying giving his passenger a scare. Two magpies thought it was a bit close for comfort, and abandoned the tree in favour of peace and quiet elsewhere.
‘Anyway,’ said Jason’s father, ‘you should be glad it’s so dry. If Mr McKenzie could get anything to grow on his land, you couldn’t practice driving on it.’
Jason waved a hand at the radio. ‘The Prime Minister’s just being selfish! He keeps talking about how much it’d cost to fix the environment, and he won’t cough up.’
‘It’s not really his money. He gets it from taxpayers like me.’
‘You and mum always tell me off when I’m selfish. Not that I ever am, of course,’ said Jason, managing to keep a straight face.
‘I guess you’re entitled to your opinion, but so is he. And so am I, for that matter.’
Jason nodded slowly. He had to keep reminding himself of that. Sometimes it wasn’t easy.
‘I’m getting a bit sick of this environmental stuff,’ his father went on. Maybe he was entitled to his opinion, but he was also entitled to another little thrill, so Jason steered towards the dry creek bed. It was almost two metres deep in places; not something you’d want to drive into.
‘Careful of the creek bed,’ said Jason’s father, with forced calmness.
‘Pardon?’
‘Creek bed!’
‘I can’t hear you over the radio.’
‘STOP!’
Jason spun the steering wheel hard, spraying a shower of
rubble from the back wheels into the gully. Jason’s father was thrown against the car door.
‘Sorry about that, Dad. There’s a dry creek bed just there.’
‘I think I’ve had about as much of this as I can hack. Anyway, we’ve got to get ready for that church picnic your mother wants us to go to.’
‘Oh yeah. Bummer. Anyway, thanks for the lesson, Dad.’
‘If you really want to thank me, you can lug that tanbark around the back sometime. There’s a ton of it, though.’
‘No, I’ll do that.’
After Jason parked the four-wheel-drive in the shed, he and his father trudged across the stubbly paddock back home, which was just next door. A cloud of dust, kicked up by Jason’s driving, hung over the whole field; it was so thick that it made their teeth gritty.
‘Don’t forget to thank Mr McKenzie for letting you use his car and field,’ said Jason’s father.
‘Why don’t you get a four-wheel-drive, Dad? Then I could hoon around here whenever I wanted. School holidays are coming up, you know.’
‘They’re expensive, is why. We won’t be getting another car for yonks, I’m afraid. Maybe never, if the government does all those environmental things you want them to.’

Peter McLennan served for 28 years in the Royal Australian Air Force, where he focused on strategic planning. He has tertiary qualifications in engineering, information science and government, and a PhD in planning for uncertainty. He has had several non-fiction titles published. Peter now writes fiction from his home in Canberra, Australia. His hobbies include playing computer games badly and developing software badly.

Watch out for more books by Peter McLennan on FKB soon!

See more books about conservation on FKB below

Discover Your Changing World With NOAA Activity Book - How does the sun drive Earth’s climate system? How do the ocean, ice, clouds and atmospheric gases affect the impact of the Sun’s energy on the Earth? How have plants, animals, and humans affected Earth’s climate? How may Earth’s changing climate effecting plants, animals and humans? What tools do scientists use to monitor weather, and ...

All About Kiwi Birds - Kiwis are unusual birds with several mammal-like properties. This book tells you about the evolution of their unique features and where you can find them now. The kiwi birds are in danger and need to be protected. The author hopes to spread awareness to help save the kiwis.    Spread the love

Drop by Drop Makes an Ocean – junior environmentalists in action - The pond in the village is so blue and deep and refreshing, that is until irrigation plans were put in place and a factory was built neraby which dumped waste in the pond. Now the pond was polluted and nearly dried up. The village children decide to work together to make a difference, with a ...

Neelu and the Phenomenal Printer – 3D Printing - When a friend visits Neelu she has some amazing stories to tell about animal rescues and animal prosthetics. The book explains how 3D printing helps in the animal prosthetics industry including some real examples at the end. Author: Riddhi Dastidar, Illustrator: Anupam Arunachalam Sample Text from Neelu and the Phenomenal Printer Miru Mashi is visiting ...

Chipko Takes Root – Saving trees of the Himalayas - Here is a story set in the hills that shows what bravery and grit can accomplish. Dichi, a brave Bhotiya girl takes part in the Chipko movement to save her beloved trees. Everybody in her village knows that trees give them all the important things in their life. Rapid deforestation in the Himalayan region of ...