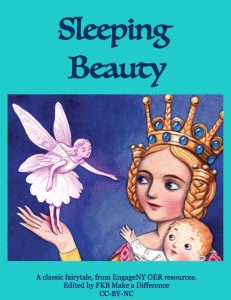 This illustrated eBook and read online version of Sleeping Beauty is based on the Brothers Grim version of the classic fairytale.

See the teaching version of this ebook here: https://www.engageny.org/resource/grade-1-ela-domain-9-fairy-tales

Once upon a time there lived a king and queen who for many years were very sad because they had no child. At last a little daughter was born to them, and the king was so happy that he planned a great feast in the palace, to which he would invite all of his friends and relatives.

Now in his country there were thirteen fairies. Of course the king wished to invite all of the fairies to the feast too, so that each might look kindly upon his child, and perhaps give the baby a special fairy gift.

But as the king had only twelve gold plates for the fairies to eat from, it was decided that one fairy had to be left out.

The feast was held, and what a wonderful celebration it was. As it drew to an end, the fairies came forward to give the child their special gifts. 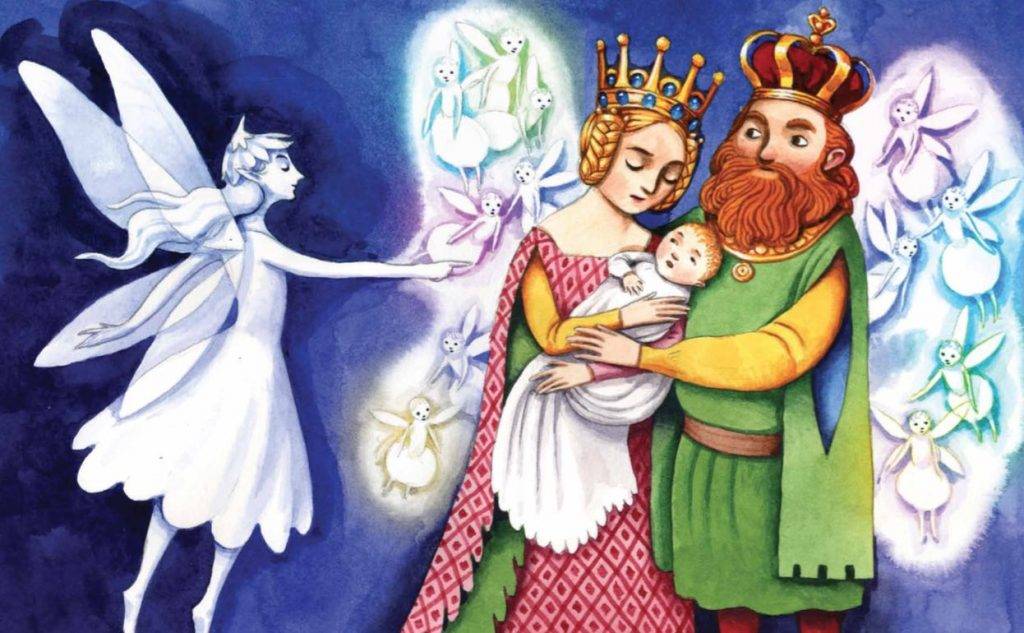 And on it went, with each fairy giving everything in the world that one could wish for.

Eleven of the fairies had given their gifts, and the twelfth was just about to speak when suddenly, in came the thirteenth fairy— the one who had been left out.

She was very angry, and she cried out in a loud voice, “When the princess is fifteen years of age, she shall prick herself with a spindle and die!”

Without another word, the angry fairy left the hall. Everyone was terrified at what she had said.

Then the twelfth fairy came forward and said, “I cannot undo the evil spell, but I can soften it. Here, then, is my gift to the child. The princess shall not die, but she will fall into a deep sleep for a hundred years.”

The king was determined to protect his child. “Surely,” he said, “my daughter cannot prick herself with a spindle if she never sees one.” So he gave an order that every spindle in the kingdom should be burned.

The princess grew up, and all the fairies’ gifts to the child were plain to see: she was good, wise, kind, and beautiful. Everyone who saw her loved her.

On the day that she turned fifteen, the king and queen were away from the palace. The princess was left on her own, and she wandered about the palace, looking into all sorts of places, and peeking into rooms that she had never explored before. She climbed a narrow winding stair that led to a little door with a rusty key sticking out of the lock.

She turned the key, and the door opened, and there in a little room sat an old woman with a spinning wheel, busily spinning away.

“Good day,” said the princess, entering the room. “What are you doing?” she asked, for she had never seen a spinning wheel before. 1
“I am spinning,” said the old woman.

The princess stretched forth her hand and asked, “What is this thing that spins around so merrily?” But hardly had she spoken when she pricked her finger on the spinning wheel’s spindle, and in that very moment she fell into a deep sleep.

At the same time, sleep fell upon everyone in the palace.

The king and queen, who had just come home and were in the great hall, fell fast asleep.

The horses in their stalls, the dogs in the yard, the pigeons on the roof, and the flies on the wall—all fell asleep.

Even the fire on the hearth* went out, the wind stopped, and not a leaf fell from the trees.

* A hearth is the bottom of replace, where the wood is put.

In time, a hedge of thorns began to grow around the castle, which grew thicker and higher every year, until at last nothing could be seen of the castle, not even the flags on the highest towers.

As the years passed, stories spread throughout the land of a beautiful princess sleeping behind a wall of thorns.

Many a young prince came, but none could break through the thorns. But at long last, after many, many years, there came into the country a king’s son who heard an old man tell that there was a castle standing behind the hedge of thorns, and that there a beautiful enchanted princess lay sleeping.

The prince said, “I shall make my way through and see the lovely princess.” The old man warned him that many had tried and failed, but the prince would not listen.

For now the hundred years were at an end, and the day had come for the sleeping princess to be awakened. When the prince drew near the hedge of thorns, it changed into a hedge of beautiful flowers, which bent aside to let him pass.

When he reached the castle yard, he saw the horses and dogs lying asleep, and on the roof the pigeons were sitting with their heads under their wings. As he entered the castle and climbed the steps, the prince saw everyone still asleep—the king, the queen, the cook, the maids, everyone. All was so quiet that he could hear his own breathing.

At last the prince went up the narrow winding stair and came to the room where the princess was sleeping. When he saw her looking so lovely in her sleep, he could not turn his eyes away. He bent down and kissed her, and she opened her eyes and smiled at him.

Together they went down the stairs, and they saw the king and queen waking up, and all the people in the castle waking up and looking at each other in great surprise. The horses in the yard got up and shook themselves. The dogs sprang up and wagged their tails. The pigeons on the roof flew into the fields. The flies on the wall buzzed and crept a little farther. Even the kitchen re leapt up and blazed.

At last the wedding of the prince and princess was held with great feasting and rejoicing, and they lived happily together for the rest of their days.

-THE END of the Classic English Fairytale-

1. At the beginning of the fairy tale, why do the king and queen have a feast?

3. Who is invited to the feast?

4. How many fairies are there?

5. How many fairies are invited to the feast?

6. How do you think the thirteenth fairy will feel about not being invited to the feast?

7. What are some of the gifts given to the child by the fairies?

8. What does virtue mean?

9. What does wisdom mean?

10. Do you think the king makes a good decision not to invite the thirteenth fairy?

11. Why is the thirteenth fairy angry? And what does she do?

12. How does the twelfth fairy, who had not yet given her gift, and then the king try to solve, or fix, the problem of the evil spell?

13. What happens on the princess’s fifteenth birthday when she finds a spindle?

14. Why do you think there is still a spindle in the castle after the king said that all of them should be burned?

17. Why do you think this fairy tale is called “Sleeping Beauty”?

18. Have you ever known someone who has shown great wisdom? Tdescribe the person using the term wisdom, for example: “My grandfather has wisdom about . . . ”]

19. Use a Drawing activity for follow-up. Directions: Draw an individual who you think has/shows great wisdom. Explain why you chose them. Remember to answer in complete sentences and use the word wisdom when you answer.

20. Describe the following aspects of the fairytale:

(this can be done as a discussion)

See more of our books fairytales here below

See more of our classic books selection here below