Tania In A Winter Wonderland 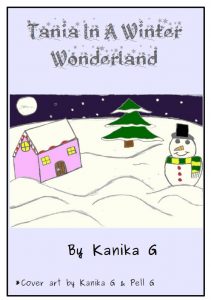 Tania In A Winter Wonderland – This is book 31 of The Tania Series. Tania and her family visit Shimla again, but this time in winter. Tania and Sonia see, and play in, snow for the very first time ever. The family has to deal with a winter crisis, but they all co-operate to overcome the problem. Tania learns some fascinating things about water and ice and Mama and Papa show her an interesting experiment. Tania also discovers, that she is better than Mama and Papa at something, and she gets to teach them for a change. Sonia, as usual, is adorable cuddly and funny. Read on to find out all about Tania’s adventures in a winter wonderland.

The book is suitable for 8 to 12 year old kids.

The story is 3500 words long and has 4 chapters and a few pictures. The snow man picture in the book was drawn by my 5 year old daughter, Pell.

Text from Tania In A Winter Wonderland 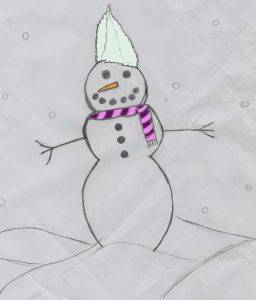 “Mama, look outside. Mama look! Sonia look!” The seven year old Tania shouted in excitement, as she looked out of her first floor bedroom window. It was 2:30 pm. She and her family had only just arrived at a cottage in Shimla,
that her parents had booked for the winter holidays.

“What’s up Tania?” Mama asked, making her way to the window.

“Its snowing Mama.” Tania said, unable to tear herself away from the mesmerising sight. It was the first time she had seen the white flakes descend from the sky.

Mama put her arm around Tania and smiled. “It’s beautiful isn’t it? And everything becomes so quiet when it snows.”

Three year old, baby Sonia, was helping Papa unpack in the living room on the ground floor. She came running as fast as her little legs could carry her, as soon as she heard her sister, Tania, call.

“What happened?” Her eyes were wide with excitement, as she entered the bedroom.

“Look Sonia. It’s snowing.” Tania said, helping Sonia on to the window ledge, so she could see.

“Snow. Snow!” Sonia squealed, trying to reach for it. Fortunately the window had bars on it.

Mama laughed. “Be careful Sonia, and I’ll leave the two of you to enjoy the snow, while I go help Papa unpack.”

A few minutes later, Mama returned with a tray loaded with two steaming cups of hot chocolate and a plate of naankhatais. She found her daughters huddled in a blanket on a large chair by the window, watching the snow. Mama placed the tray on the window ledge and left.

A couple of hours later, after Mama and Papa had unpacked and set up the cottage for their week long stay, they went to check on Sonia and Tania.

The girls had finished their cocoa and biscuits, and had fallen fast asleep, cuddling each other on the chair.

The sun was sinking behind the trees, and pink light bathed the cottage and its surroundings. Mama gently woke the girls up.

“Look out of the window now, girls.” She whispered.

Tania and Sonia groggily looked out of the window, but what they saw, made their jaws drop. It had been snowing heavily while they were asleep. Outside the trees were all covered in a blanket of snow, glowing pink in the twilight.
Neither of them had ever seen anything so beautiful, and, indeed, as Mama had said, it was very quiet.

They marvelled at it for a few minutes, and then Tania asked. “Mama, Papa, can we go play in the snow?”

“Yes. Of course.” Mama replied. “But you need to wear your jackets, caps, scarves, gloves and shoes.

Soon the girls were outside. Tania started making a snowman and Sonia helped her. They used twigs for arms and pebbles for the eyes, smile and buttons. They made him a tin foil hat and used a carrot for the nose

See more books about Seasons below

All Seasons – Early Reader - All Seasons is an early reader, rhyming book about seasons aimed at kindergarten children. The book is in a reader-friendly open dyslexic text. By: Free Kids Books     Sample Text and Images From All Seasons: Summer, Fall …Winter, spring. There are four seasons The year will bring. Winter Is cold. In some places it snows. We love lighting ...

Tania Tells a Story - Tania writes a fantasy story inspired by a science article. Sonia’s journey on an emotional roller-coaster as Tania skillfully weaves the plot through curiosity, fear, relief, hope, excitement, anger and so much more, leaves her with a lot to think about. Tania’s dramatic narration, and the little discussions between the sisters add to the charm ...

Tania and the Mystery Smoker - This is book 35 of The Tania Series. Sonia is burned by a cigarette butt that falls on to the balcony of her home. Tania is enraged. She is determined to find the person who hurt her little sister and put a stop to their barbaric behavior by publicly humiliating them. But how will she ...

Tania Gets A Shock – A story about puberty for girls - This is book 33 of The Tania Series. One day in school, nine-year-old Tania suddenly notices bloodstains in her underwear. She realizes she is bleeding, and it won’t stop. Where is the blood coming from? Is she sick? What’s going to happen? Read on to find out more about Tania’s experiences, this book is a ...

Tania Gets Lost -   This is book 32 of The Tania Series. Tania is growing up, and so is her thirst for adventure. After reading many books about kids solving mysteries and stumbling upon secret passages, Tania is craving an adventure of her own. Tania and her best friend Tanisha, are vacationing with their families in a small ...