The Adventures of Philautus Frog – The Tree Frog 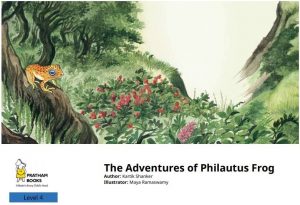 Philautus the tree frog known to his friends as Thavalai was born on the Big tree in the middle of a shola forest, a dark, deep and wet forest, dripping with dew, dank with mildew. His family had lived on a big tree for as long as anyone could remember and did not come down. Other frogs made fun of him that he had never been a tadpole because he was a tree frog. Thavalai had no idea what the different places outside the big tree other than hearing these names from a few friends. He wanted to see other places, Philautus wanted to see the blue sea which was far away from his home.

The Adventures of Philautus The Tree Frog is aimed for young readers who can read with confidence and fluently rated as English level 4, brought to us by Pratham’s Storyweaver.

Text and Images from The Adventures of Philautus  The Tree Frog

Philautus, or Thavalai, as he was known to some friends, had not come down from the Big Tree his whole life. But then, neither had his father. Or mother. Or grandparents. Or great grandparents. Before that, who knew? They had lived there on the Big Tree for as long as anyone could remember. He had been born on the Big Tree, in a small nook, and splashed around as a little froglet in the tiny puddles of water that collected in the tree holes. As had his father before him.

Sometimes the other frogs made fun of him, because he had never been a tadpole. ‘You were not a tadpole’ they chanted. But Thavalai was a tree frog and proud of it.

The Big Tree was in the middle of a shola forest, a dark, deep and wet forest, dripping with dew, dank with mildew. 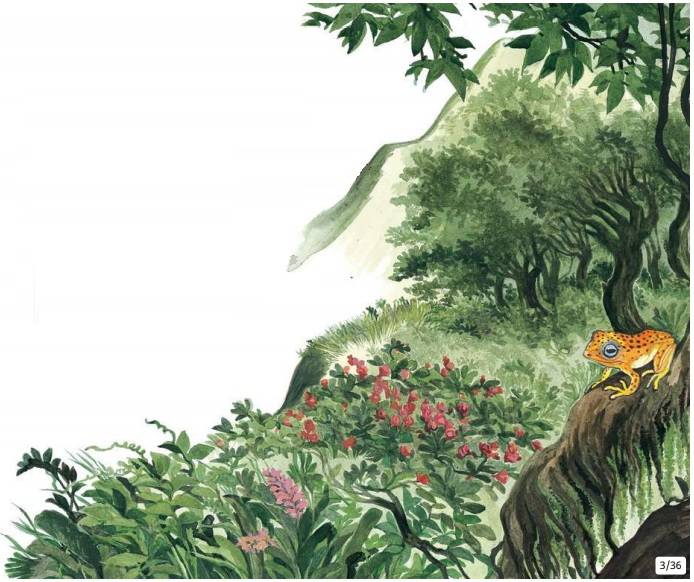 The shola nestled snugly at the bottom of a valley and was surrounded by
undulating hills of grassland. Little fingers of shola forest snaked up the hillslope where rain-fed streams had cut their courses. And as much as the
seasons raged out in the grassland, inside the shola it was always cool.
The grassland is a harsh land, Thavalai’s father used to say. It’s sizzling hot in
the day and freezing cold at night. But here in the shola, it’s always cool and
moist. That’s why you must always stay here.

See more books about Nature below: