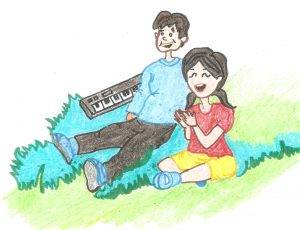 The New Kid – Neha has just returned from a long vacation. Her friends give her a warm welcome. But in the time she was gone, a new family has moved in to the housing society and her friends have issues with the new kid. Neha wants to be friendly with him, but will her old friends tolerate that, or will she lose her old friends in making a new one? Read on to find out.

Text from The New Kid

Neha had just returned from a vacation with her parents. She
was eager to meet her friends. I wonder if Priya missed me,
she thought, as she skipped to Priya’s apartment.

Priya’s mother, Renu answered the doorbell. “Hello, Neha.
How was your holiday? You went to Shimla, right? It must
have been really cold.”

Neha had been waiting for someone to ask. “Yes aunty. My
aunt dropped me off at my dada-dadi’s place in Indore. I
stayed there for a few weeks. Then my parents joined us
there, and we all went to Shimla together for a week. Shimla
was amazing aunty. I saw snow for the first time ever!
Where is Priya? I can’t wait to tell her all about it.”

“That is lovely Neha. Priya is taking a shower. She should
be here in a minute.” Renu walked to the corridor and called
out loudly. “Priya, are you done? Neha is here.” 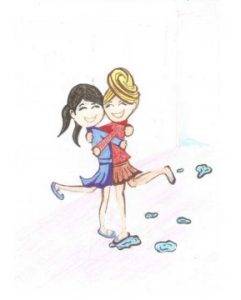 Just then Priya emerged, towelling her wet hair. She rushed
over to give Neha a hug. “Oh hi Neha. You are finally back.
I missed you. I’ll be ready in a few minutes.”

A few minutes later, the two 10 year old girls, stepped out of
Priya’s apartment. Neha was chattering away about
snowmen and a horse ride on a snowy mountain. As they
waited for the elevator, a woman stepped out of another
apartment on the same floor and entered the elevator, with
them. Neha frowned, but said nothing, until they were all
out of the elevator. “Hey who was that lady? Doesn’t Vibha
dadi live there any more?”

Priya raised her eyebrows. “Oh I forgot. You have been
away more than a month. Vibha dadi had a bad fall. She was
really weak. She loves staying alone you know, but the
doctors said it is too dangerous. So her daughter finally
managed to convince her to move to Bangalore. They have
given the apartment on rent. The new tenants just moved in
10 days ago.”

“Really? Do they have any kids our age?” Neha loved
making new friends.

“Well yes.” Priya seemed reluctant to talk about it.
“Is it a boy or a girl? Come on tell me.” Neha asked
curiously as they stepped in to the play area. Then she
suddenly stopped, when she saw Arun playing with her
friends, Rohan, Sasha and Nikhil. “Hey, how come Arun is
playing with our group? I thought we got rid of him. He is
such a bully.”

“Oh! Arun is fine. He doesn’t bully us any more. He is quite
funny and knows a lot of stuff. He is almost 12 you know.”
Priya urged Neha along.

See more books about Bullying below

Survival Guide – There is Help - This is a survival guide and workbook designed specifically for teens or young adults who may have thoughts of self-harm. The ebook is available as a pdf which you can print and fill in by hand or edit using the pdf annotate tools and also as an editable odg file (Open Office Draw). Note the ...

The I-Forgot Kid - A poignant tale of a child’s first speech on stage – a much anticipated moment of excitement, which turns into a haunting experience. The little girl who was teased and bullied grows up to help prevent the same actions at the school she works in resulting in long-term change. The story ends with a potent ...

Always Be Nice – 10 lessons in kindness, revised edition - Always be Nice is a short book for young children promoting kindness and manners and can be used as an early reader. The book is perfect for building confidence in reading with only 28 words most of which are simple words. This book also teaches kids ten important lessons about being kind to others. Each ...

The Green Chicken - It’s not easy to be a chicken, for a weird green chicken like Chop life is almost impossible. Mocked and insulted by nearly everyone, he dreams to be a normal chicken…Find out more about Chop’s journey of discovery in this beautifully illustrated children’s book by the author of “Bubu’s Tales”. See more by Ivan Parvov ...

Voices of Children – Child helpline stories and help - This poignant account of children and teen’s child helpline calls can help children put their problems in perspective or recognise that there are ways to get help. Over thirty stories of problems from too much schoolwork or friendship difficulties to suicide and physical and sexual abuse. The book also includes worldwide contacts for Child Helpline ...

Don’t Be a Bully – FKB Be Nice Series Book 3 - Don’t be a Bully is a short simple book for young children, and beginner ESL readers, promoting values of anti-bullying and anti-discrimination. This book teaches children ten important life lessons about values and the importance of treating everyone equal, no matter what race, religion, gender, or abilities. There are exercises supporting the topics at the ...

Billy Gets Bullied – Book 1 Billy Growing Up series - Billy Gets Bullied is the first book in a series called Billy Growing Up for upper elementary children, tackling important topics for children growing up and facing the difficult middle-grade years. Aimed at 6 to 9-year-olds, this story helps children understand why bullying takes place and what they can do to stop it. Billy Field ...

Red Moon, White Moon – Middle Grade Fantasy Novel - In Red Moon, White Moon, Connell Maxwell realized early on in life that school had a strict hierarchy: the bullies and the bullied. Unfortunately, he was doomed to be a member of the latter group. He always wondered if it was his friends who put him there, but, deep down he had another suspicion, his ...

The New Kid - The New Kid – Neha has just returned from a long vacation. Her friends give her a warm welcome. But in the time she was gone, a new family has moved in to the housing society and her friends have issues with the new kid. Neha wants to be friendly with him, but will her ...

Tania Tells a Story - Tania writes a fantasy story inspired by a science article. Sonia’s journey on an emotional roller-coaster as Tania skillfully weaves the plot through curiosity, fear, relief, hope, excitement, anger and so much more, leaves her with a lot to think about. Tania’s dramatic narration, and the little discussions between the sisters add to the charm ...

Tania and the Mystery Smoker - This is book 35 of The Tania Series. Sonia is burned by a cigarette butt that falls on to the balcony of her home. Tania is enraged. She is determined to find the person who hurt her little sister and put a stop to their barbaric behavior by publicly humiliating them. But how will she ...

Tania Gets A Shock – A story about puberty for girls - This is book 33 of The Tania Series. One day in school, nine-year-old Tania suddenly notices bloodstains in her underwear. She realizes she is bleeding, and it won’t stop. Where is the blood coming from? Is she sick? What’s going to happen? Read on to find out more about Tania’s experiences, this book is a ...

Tania Gets Lost -   This is book 32 of The Tania Series. Tania is growing up, and so is her thirst for adventure. After reading many books about kids solving mysteries and stumbling upon secret passages, Tania is craving an adventure of her own. Tania and her best friend Tanisha, are vacationing with their families in a small ...