¿Cuáles son los colores? is the spanish version of 7 Colours Of A Rainbow. In this picture book young children will learn the different colours of the rainbow and where these colours could be seen in everyday life. Perfect for young children to learn new words and name and identify colours.

This is a Spanish Level 1 Picture book brought to us by Pratham’s Storyweaver under a creative commons license. This is perfect for young readers who want to start reading. This Spanish Level 1 book is suited for children aged 2-5 years old or beginner Spanish. It has a lot of colourful pictures that compliment what is being said in the story. 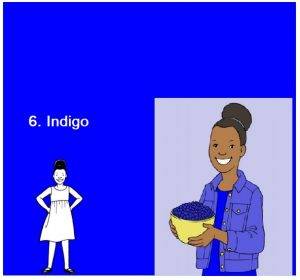 <end of book – What are the Colours – Spanish story>

‘7 Colours of a Rainbow’ was published on African Storybook, adapted by Jane Taylor and African Storybook © African Storybook Initiative 2015 www.africanstorybook.org with the Vision of providing children with an open access to picture storybooks in the languages of Africa to develop their literacy, enjoyment and imagination.

Read this book in different versions below.

7 Colours Of A Rainbow

7 Colours of the Rainbow – A Hindi Story

See more books in Spanish below

See more books about Colours below

Bow Meow Wow – Wordless Picture Book - Bow Meow Wow a fun and action packed wordless picture book from Pratham Books.  Perfect for pet lovers, here we see cat and dog chasing each other while ending up covered in paint, but the result might not be better than expected. This is a Level 1 picture book perfect for very young children. The ...

Roy The Rat and his Six Thinking Hats - Roy the Rat has six thinking hats that he use whenever he wants to enter the process of making a decision. These hats help him approach situations carefully, by judging from different angles, and assist to avoid making hasty decisions or mistakes. This is a great technique that children can learn to apply in day ...

The BIG Red Balloon! – Rhyming Picture Book - The BIG Red Balloon Have you seen the BIG red balloon? Oh NO! Where could it be? Where is the beautiful big red balloon? This book is perfect for young readers and beginner English learners to improve their vocabulary and learn new words. The book provides a rhyming repetition of sentences then adds a new ...

7 Colours Of A Rainbow – Early Learning STEM - 7 Colours Of A Rainbow – A cute picture book that teaches the colours of the rainbow and where those colours can be seen in nature and in daily life. Perfect for very young children learning colours and english words. This book is by Caren Echesa and illustrated by Jesse Breytenbach. This is a Level ...

I See Colours - I See Colours – A short book with the phrase I see…. and animals of different colors. A nice short book for very small children and early readers. By: Mustard Seed Books     I See Colours – These books for beginning readers support phonics-based classroom instruction by including a high concentration of phonetically regular words, ...

Tale in Orange - Tale in Orange – Marianna loves orange color -and everything with orange color (oranges, carrots etc)- and with a magic turn of events she finds herself in Portokalia. A strange land where pianos write fairy tales, the houses have no roofs and you may drink as much orange juice as you like. She will make ...