Tania’s Cycling Adventure – Four year old Tania is riding her bike around the hotel where their family is on holiday. Her Mama told her to stay in sight while cycling around. Tania is a fairly good girl, she tries to do what she is told, but then something caught her interest and she she forgot all about being good…From Kanika G’s series of short books for young children, about real adventures. 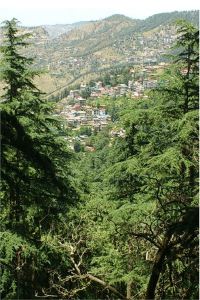 It was summer. The Month of May was unbearably hot in Bombay. So every year during the worst of the sweltering hot weather, Tania and her parents left the city for a week long vacation to a hill station.

This year they went to Shimla. Shimla is a hill station in the mighty Himalayan mountain range.

Tania an her parents where staying in a resort with sprawling grounds. The area around the hotel was surrounded by lush green cedar and pine forests.

The place was indeed very picturesque.