Tania’s New Bicycle – Tania is big enough now to have a ‘two wheel’ bike! Her mama and papa buy her one, but can she ride it? A delightful tale of fear, courage, trust, and triumph. Will Tania learn to ride? Find out in this story, another great adventure with subtle but important lessons, in an event most of us can relate to. This is book 10 in The Tania Series. 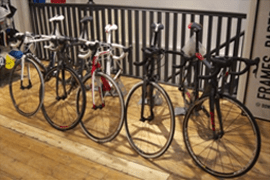 Tania was now quite adept at riding her tricycle. She was getting a little too big for it. Mama and papa thought it was time for her to graduate to a bicycle now. On Sunday mama and papa took Tania to the cycle store.

It was a huge store, with a large selection of cycles. There were big cycles and small cycles of many different colours. Some had bells, andsome had pretty bicycle baskets attached.