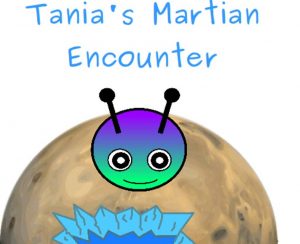 Tania’s back with more adventures in Tania’s Martian Encounter.  In Tania’s latest adventure, she’s heard about the new discovery of water on Mars. It’s simply fascinating, and Mama explains to her all about the planets and how important the discovery is. Tania’s uncle works for NASA and is coming to visit, so she is expecting even more excitement. But her uncle is known as a prankster – will he trick Tania this time or not?

This book provides some great facts about space, told in a simple and entertaining way. A perfect book to inspire future physicists or astronauts. 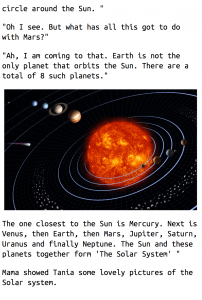 Tania was waiting for her Uncle Karan to arrive. Uncle Karan was a prankster, he had helped Tania play a few practical jokes on her friends, and Tania thought he was super cool. Also, there were some important things she wanted to discus with him.
It all began on the 29th of September 2015, when the planet Mars had quite literally made a Splash in the media. NASA had just announced that, there was evidence of water on Mars. Mama said “You know Tania, your uncle Karan works for NASA. I am sure he will have some interesting things to tell us when he visits in a few months.”
<End of Page 1>

See more books about Space below